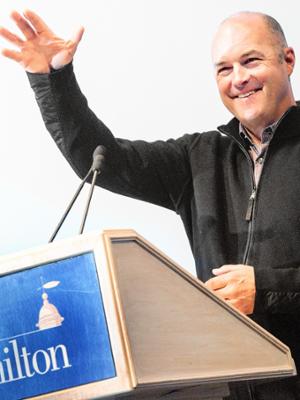 Presented to Guy A. Hebert ’89

During a weekend when we observe the 100th anniversary of hockey on College Hill and in the local community, we honor the first hockey professional ever to hone his skills at historic Sage Rink.

Despite the long odds of making the jump from a Division III college to the National Hockey League, you achieved your boyhood dream when the St. Louis Blues selected you in the eighth round of the 1987 draft, assigned you to Peoria in the International League, and then called you up for your NHL debut in December 1991, a 6-3 victory over Buffalo.

“I always wanted to play one NHL game,” you told the Orange County Register in 2004. “I figured if I could get a crack at it, play one game to see if I could measure up, everything after that would be gravy. I had a lot of gravy in my career.” Not bad for a kid from Troy, N.Y., whose decision to become a goalie was foisted upon him by the older kids on the block.

In the 1993 expansion draft, you were the first pick of the Anaheim Mighty Ducks, making you forever the original member of the team. Your degree in studio art came in handy when you designed your goaltender’s mask, which became an iconic symbol of the Disney-owned team. Blessed with keen vision, concentration, and outstanding ice awareness, you spent eight years as the team’s starting goalie, becoming one of the NHL’s premier netminders in the 1990s, and earning a spot in the league’s All-Star game in 1997. You finished the 2000-01 season with the New York Rangers before retiring the following year.

During your career, you represented the United States at the 1994 World Championships, the 1996 World Cup of Hockey, and the 1998 Winter Olympics in Nagano, Japan. In 1993-94, you were named male athlete of the year by USA Hockey and helped Team USA finish fourth at the World Championships.

In recognition of a distinguished professional career we honor you on the same weekend we celebrate the rich hockey tradition in Clinton, N.Y.