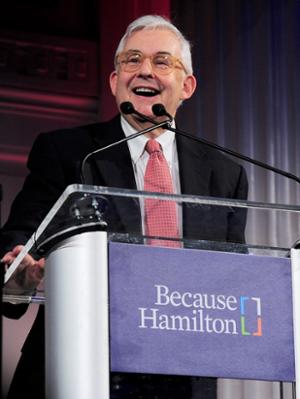 In 2014, the Hamilton Alumni Association named the Volunteer of the Year Award in your honor and selected your friend Linda Johnson as its inaugural recipient. The award recognizes those who have made a substantial, lasting contribution to the College. If Hamilton had a top award for fundraising, it would be named for William McLaren Bristol III, Class of 1943, and you would be the overwhelming choice as its first recipient.

You and Mac Bristol share a lot more in common than a complete and unconditional love for Hamilton College. Like Mac, you left Hamilton to join a pioneering family business, and it was during your presidency that George Little Management, which was founded and named for your grandfather, became internationally recognized as a dynamic leader in the trade show industry. You brought that record of accomplishment to Hamilton and again, like Mac, you became one of this College’s most loyal benefactors, offering extraordinary volunteer and financial support. Buildings, scholarships, internships, athletics facilities, professorships and, of course, the Hamilton Annual Fund … if the College had a need, you were first in line to address it.

Throughout Hamilton’s more than 200-year history, few alumni have served their alma mater with such loyalty and conviction, especially to raise funds for College priorities. Try as we might, we cannot find evidence anyone else in higher education has served as chair of four capital campaigns. When the Because Hamilton campaign concludes in 2023, you will have been instrumental in helping Hamilton raise more than $830 million, the largest percentage of it for student scholarship aid.

With deep gratitude and profound awe, we recognize you today for what you have done to ensure Hamilton’s future success and financial stability.