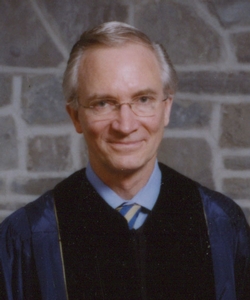 Born and bred in Princeton, New Jersey, you came to Hamilton with the Class of 1970. You proved your athletic prowess as the goalie and mainstay of the ­hockey team while majoring in art. Although the products of your studio efforts were, in your own words, “some awful paintings,” you left the Hill with an enduring appreciation for art as well as for the College itself.

After acquiring an M.B.A. from the Harvard Business School, you began a long and distinguished ­association with Goldman Sachs & Co. You rose to head of corporate finance, head of the Americas Group in the investment banking division, and now executive vice president for human capital management. While pursuing your highly demanding career, you have somehow found time to serve the cultural community as a trustee of the New York Public Library and a managing director and vice president of the Board of the Metropolitan Opera. In addition, in philanthropic part­nership with your wife, Karen, you have been greatly supportive of a variety of educational and cultural programs.

In particular, you have always and ever been responsive to the call of your alma mater. In 1994, when Hamilton was seeking a new chairman of its Board of Trustees to pilot it into
a dawning new century, your profound dedication to the College made you the ideal candidate. During the ensuing eight years, you provided vigorous leadership in major efforts to strengthen Hamilton academically and financially, and to improve campus facilities as well as the residential life of its students. The results are today manifest. Hamilton has not only made great strides in entering this new century, but it faces the future with renewed confidence. You have contributed in no small measure to that positive state, and you have richly earned the gratitude of all who, like you, hold this college dear.

Kevin W. Kennedy, acting on the authority of the Board of Trustees, I am very pleased to confer on you the degree of Doctor of Laws of Hamilton College, admitting you to all of its rights and privileges. In token whereof, we present you with this diploma and invest you with this hood.