It’s been 40 years since sociology majors Scott Eveleth ’82 and Margaret Irwin ’83 showed me around the Hamilton campus on my “candidate day,” and since [then Professor of Anthropology] Doug Raybeck tried, at my candidate dinner that evening, to persuade me to join him in the purchase of an ultralight flying machine.

I politely declined his offer.

Four days later, despite a lukewarm endorsement from the hiring committee (“Mr. Chambliss has some odd mannerisms, but the students seem to like him…”) I got the job. The hiring season was almost over, the Sociology Department was desperate, and I was happy to say yes. I’ve been lucky to work at Hamilton ever since.

And lucky, too, that only once in those years did some alums write to the president [Hank  Payne] and complain that my teaching would precipitate “the decline of Western Civilization.” Hank disagreed, and I kept my job — but more on that later.

The College has changed dramatically since I arrived. In the early ’80s, the wounds of the Kirkland merger were still fresh, kept open by an animosity that surprised us newcomers. Then the anti-apartheid divestment movement rocked the campus, with marches and teach- ins and “shanties” dotting lawns on the “light side.” Responding to the takeover of his office, President [Martin] Carovano suspended a dozen of the College’s star students, so the faculty revolted; he resigned a year or two later. 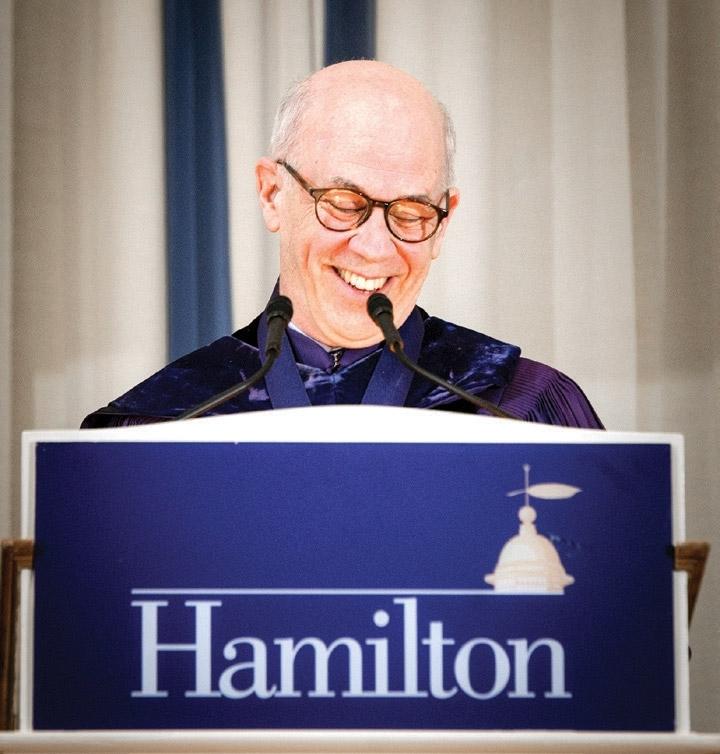 In 1995, of course, the trustees voted to close fraternity houses, ending my annual visits to the Chi Psi Halloween party and occasional dinners at AD. Once I even went to a DU clambake, but only for about 30 minutes, just enough to sample the unique flavor of that storied event. The closures had the desired effect of dramatically improving the College’s admission profile and helped move us closer to a gender-equal campus. And since 2000, the College has consistently increased its national (and international) profile, its demographic diversity, and its selectivity. Incoming students now, in my view, are academically stronger, more engaged, and consistently hardworking, but are also more anxious about their futures (reasonably enough), and apparently less likely to read for pleasure, judging from their oddly limited vocabularies. I blame the internet.

Like every teacher, I’ve had my signature techniques. For my first eight years of teaching Intro, I posed a challenge to the students: If everyone in this class skips the final exam, everyone will get an A (sounds good so far!). But — here’s the catch — if anyone, any student at all, does take the exam, everyone who skips will get an F.

Notice that downside risk. The apparently easy challenge — just don’t show up! — is in fact ruthlessly dangerous. My goal was exemplifying the difficulty of overthrowing a tyrannical government: If you shoot at a dictator, you’d better not miss.

In eight years, no class ever came close. Then in fall 1988, first-year student John Kellogg Werner ’92 spent the better part of his semester organizing the revolt. Using some official-looking legal documents, John spent long hours tracking down all 63 students (pre-social media) and getting their commitment. It worked. No one showed up for the exam.

I was genuinely relieved; could I really have funked an entire class? Then some alums complained bitterly to the president that I was giving away A’s (as mentioned above). The whole episode got national attention, but I never again offered the challenge. Believing it’s possible was the biggest hurdle, and John had cleared it.

After that, in 1991, I started using oral exams, which thousands of students since have endured with me and my colleagues. The format is simple: No written work in the course (again, sounds good so far!), just a series of one-on-one oral exams. Each exam was drawn from six essay questions shared a week in advance. For the exam itself, facing off with me, students picked three questions to answer by rolling a die. It’s nerve-wracking, especially for first-years. Hands trembled, faces turned red, but only once in three decades did I hear of a student literally vomiting beforehand. Everyone survived, learned to prepare, and gained confidence. They learned lots and even became articulate. Countless alums over the years have reported that after those exams, they never feared a job interview.

I always tried to learn students’ names. My peak performance came one day in the early ’90s in the old Chemistry Auditorium, when I successfully named all 144 students in a gargantuan Self in Society class. The last four were tough, but when I hesitatingly pointed out that final sophomore, the entire class burst out in a huge round of applause. With increasing age, though, I needed new memory tricks. So, starting around 2000, I would begin the first day of every course by lining students up around the room and snapping their individual photographs. People would giggle, and chat with each other, and make funny faces. Then before each class meeting, I’d review the pictures to help me remember names. A few years later at the family reception held the day before Commencement, I’d pull out these old photographs, share them with my students and their folks, and we’d all have a good laugh.

Along the way students learned sociology. I loved packing an entire class together, shoulder to shoulder in the KJ Auditorium, rocking back and forth chanting “Swing to the Left, Swing to the Right!” and other old football cheers; or watching Bon Jovi playing “Living on a Prayer” before 100,000 fans in London’s Wembley Stadium, seeing how group solidarity arises from interaction rituals. In Methods, we took notes about behavior in the gym and calculated percentages from contingency tables. In Theory, we studied religious callings and global capitalism, then worked on paragraphing and topic sentences. In Self in Society class, we talked about situational definitions, bad faith, and the limits of free choice. One time, on a beautiful spring day when dissecting ideas in the Red Pit was just insufficient, all 41 of us trooped outside, took a spontaneous tour of campus, and finished up by lining the sides of Martin’s Way and doing the Hokey Pokey, to the mystification of students heading to their next class. Some actually stepped around us, frowning a little.

Everything was grist for analyzing social relationships, including our own: about how to assemble and weigh evidence; how to be honest with yourself, not constrained by prior opinions; and how to write and speak clearly, so you could share your ideas. It was sociology; however, we also actually studied history, economics, political science, psychology, some math, a little biology … I taught liberal arts. It was intellectual cross-training, strengthening the mind and character to work on anything that came along. And we had fun doing it.

Here’s my advice for students: Try new stuff, new subjects, new people, and projects. Hamilton is life with a strong safety net. You’ve got a place to sleep and some good food and lots of potential friends within a few minutes’ walk. If you fail, nothing really bad happens. Therefore, you can explore in all directions. Don’t waste the opportunity; for many alums, that’s their biggest regret.

And one suggestion to new faculty: Don’t require attendance. Hamilton students want to learn. If they aren’t voluntarily coming to class, then something’s wrong, either with them or with you. Find out which it is, and do something about it. As my historian friend [Edgar B. Graves Professor of History Emeritus] Al Kelly says, “Never bore them.”

In the classroom each day counts, but true teaching is a 30-year project; we aim for the future. If you don’t completely alienate the students, they can always come back to what you said, even many years later. At a reunion reception about five years ago, standing in a crowd on the Bristol porch, I spotted a guy who took my classes in the mid-1980s. He was a lousy student, frankly, and not a very nice person; plus, I suspected — but couldn’t prove — that he cheated on a final paper. So, seeing him at the reunion, I groaned, dreading the encounter. But when he saw me, his eyes widened, and he plowed his way through the crowd, obviously wanting to talk.

“I was such a jerk!” he yelled as he approached. (OK, that’s not the actual word he used, but you get the idea.) He was embarrassed, mortified really, and apologized at length. He described a misspent youth, an eventual repentance, and now a fulfilled mid-life, in both his family and his work. And he really did learn some good things in those classes; it wasn’t my fault. By this point, we were both a bit weepy and had a big hug. All was forgiven.

So, if you’re a teacher, remember to play the long game. And if you’re an alum, please remember that for those of us now retired from long careers at Hamilton, you were not just temporary visitors to the Hill. You were, and you are, our life’s work. 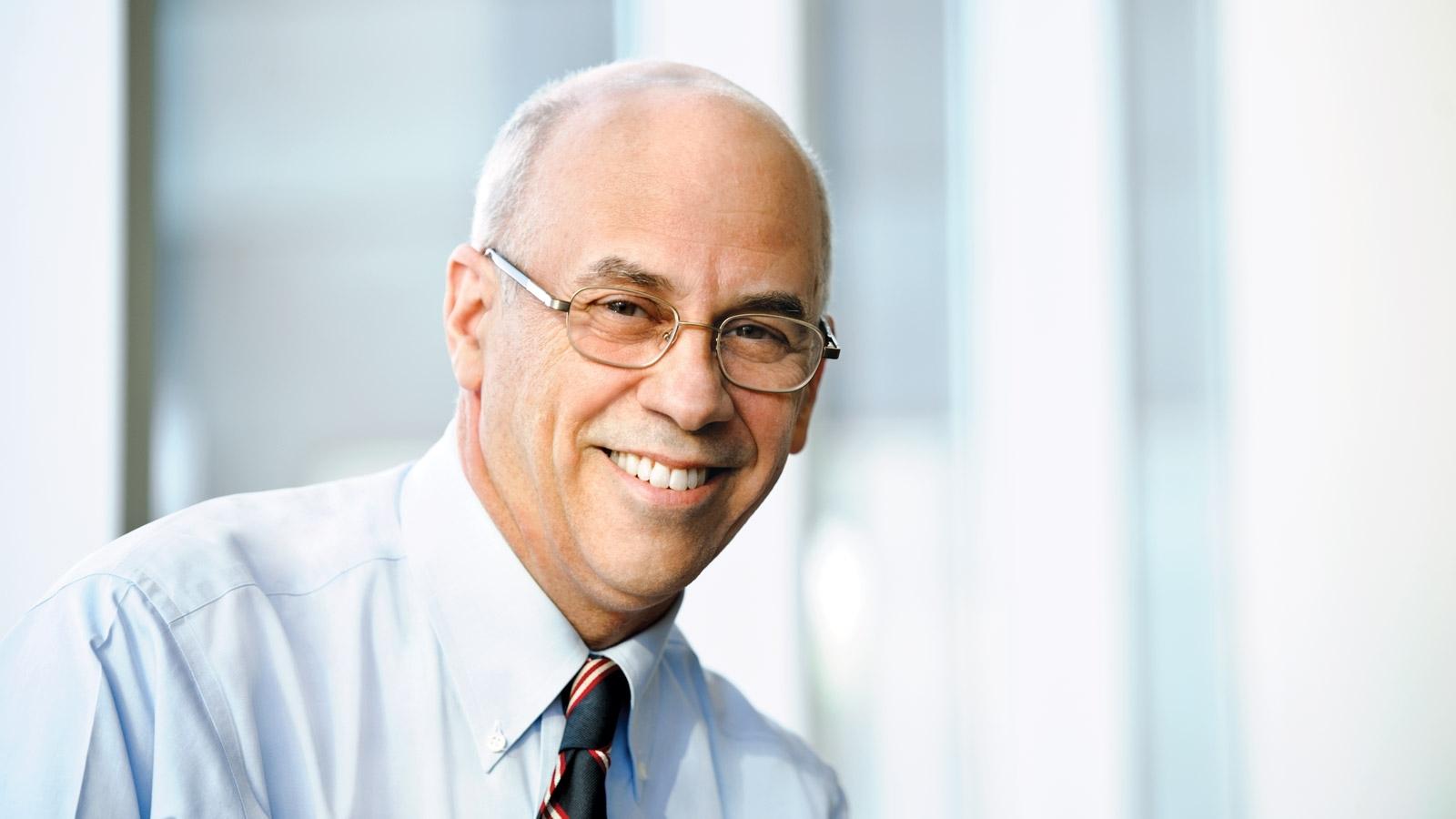