A Professor’s Battle with Treason and Truth 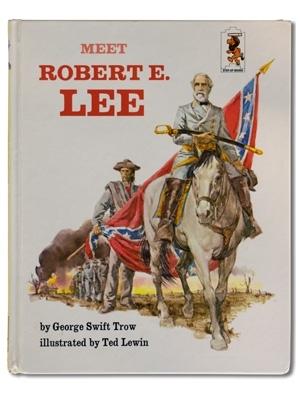 Up on a shelf in Visiting Professor of History Ty Seidule’s office in Kirner-Johnson Building is a worn copy of his favorite childhood book, Meet Robert E. Lee by George Swift Trow. It serves as an artifact from Seidule’s past, when he was a “southern gentleman” who revered the commander of the Confederate Army.
A

retired brigadier general of the U.S. Army who was raised in Virginia and rural Georgia, Seidule spent decades viewing the Civil War through the lens of the Lost Cause myth, an ideology that attempts to preserve the honor of the post-Civil War South by casting the Confederates as heroic underdogs and slavery as a positive good for both owners and those enslaved. Even as he began questioning what the myth perpetuates and acknowledged the war’s actual root cause was indeed slavery, Seidule admits that he still found himself somehow able to venerate Lee.

That would all change —his world shifted and his belief systems shattered — in the U.S. Military Academy at West Point archives. What he learned there changed him and molded him into the scholar, author, and teacher he is today.

Finally, after too many years, that’s when I had my ah-ha moment. I understood the question but not the answer, “How did this happen?”

eidule grew up in a part of the U.S. where Confederate monuments, flags, and tributes were part of everyday life, displayed proudly everywhere he looked. He read from and trusted the school textbooks that idolized Lee and promoted the Lost Cause as fact. He proudly attended Washington and Lee University — where Lee served as president after the Civil War — on an ROTC scholarship. On the day Seidule graduated in 1984, family, friends, and classmates filled Lee Chapel, the commander’s final resting place, for the commissioning ceremony where he and the other cadets took the officer’s oath to “support and defend the Constitution of the United States against all enemies, foreign and domestic.” Afterward, their pictures were taken alongside Confederate flags and in front of a white marble recumbent statue of Lee, in his uniform and asleep on an unnamed Civil War battlefield that served as the centerpiece in the chapel’s apse.

Seidule went on to serve his country in Kosovo, Saudi Arabia, Iraq, and other locales. He then became an assistant professor of history at West Point after earning his master’s degree from The Ohio State University in 1994 and while obtaining his Ph.D. from the same institution in 1997. He left West Point briefly to return to the operational Army, but returned six years later when he was offered a permanent faculty position, eventually becoming head of the history department for the academy.

A few years after he returned, he was walking across the post when he stopped to notice a sign for Lee Barracks. He thought about how he and his family lived on Lee Road, by Lee Gate, in the Lee Housing Area. Then he noted a new memorial, Reconciliation Plaza, that was added while he was away that featured Union Army Commanding General Ulysses S. Grant and Lee.

“Finally, after too many years, that’s when I had my ah-ha moment. I understood the question but not the answer,” he writes, noting how he ran around everywhere only to find more and more monuments and spaces memorializing Lee. “‘How did this happen?’ I asked, but no one knew or cared.”

He went to the archives, suspecting that many of these tributes were erected in the years immediately following the Civil War in an effort to heal lingering wounds. Months of research revealed that was not the case. Even though the academy had deemed any soldier fighting for the Confederacy to be considered treasonous, Lee was first memorialized on the post 65 years after the war in the 1930s. Seidule considered a possible reason: it was right around the time that the first Black cadet of the 20th century, Benjamin O. Davis, Jr., came to West Point.

Seidule continued his research and uncovered that the tributes to Lee and other Confederate memorials came at various times throughout the 20th and early 21st centuries, some more than 100 years after the end of the Civil War. His research illustrated that nearly all of them appeared to correlate with crucial moments in the Armed Forces’ history when faced with racial integration. The more he learned, the more disgusted he was with what he found.

“Not only did the facts change me, but they made me outraged,” Seidule says with conviction. “They turned me into a historian and an activist.”

nstead of running from or avoiding his past, Seidule presses toward it each day. He believes more people will listen if he shines a light on hard truths while acknowledging his own. “My background is as an armor officer responsible for tank and cavalry operations, so my personality is that of a tank officer. Tanks go through things; they don’t go around them.” 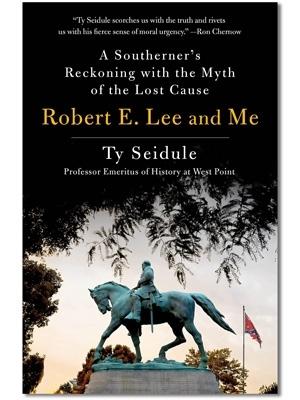 He began writing and speaking regularly on the topic. He returned to his alma mater and Lee Chapel where he stood in nearly the same spot he did when he was commissioned decades earlier. There, he called Lee a traitor while standing on his grave. Seidule retired from the Army in 2020 so he could pursue writing his memoir, Robert E. Lee and Me: A Southerner’s Reckoning with the Myth of the Lost Cause (St. Martin’s Press, 2021).

Looking for an opportunity to both write and teach, he learned about The Chamberlain Project, named after Civil War general Joshua Chamberlain. It offers retired U.S. Armed Services officers teaching fellowships at top colleges and universities. Life Trustee Elizabeth McCormack helped connect Seidule with Hamilton, and after a snow-covered visit to campus in the winter of 2020, he accepted the offer to serve as the College’s inaugural Chamberlain Fellow. When the two-year fellowship concluded at the end of the 2021-22 academic year, Seidule asked to stay and was offered a visiting professorship role.

I’m lucky to be here,” he says. “My classes have been wonderful. The students are amazing. We have great faculty and a dynamite History Department. It’s a great school and a great place.”

nergetic conversations between Seidule and student researcher Bobby Grygiel ’23 could be heard in the back offices of KJ throughout the summer. Grygiel received College funding to work with Seidule to interview Black graduates from West Point’s Class of 1972 who spoke out and successfully fought against President Richard Nixon’s attempt to have the academy add a Confederate monument at the time. A history major, Grygiel planned to talk with nearly 20 graduates and document their perspectives and stories for Seidule’s next book, Our Right to Serve: The Black Cadets Who Challenged the President, Changed West Point, and Inspired an Army. Even with this important task at hand, Seidule empowered Grygiel to learn through doing and take ownership of his role in the project.

“What I most enjoyed about working with Professor Seidule is the freedom with which I was allowed to work,” Grygiel says. “I liked having the ability to constantly modify my approach, especially since each interviewee is different.”

Seidule is intentional about finding ways to bring history to life for his students. (He’s even been known to facilitate an outdoor drill session as part of a course, complete with 1860s fife and drum music and Seidule dressed in a U.S. Army Cavalry Stetson giving marching orders.) His approach with Grygiel was no different. “[Bobby was] not in the bowels of some archives going through microfiche. Instead he’s getting to interact with these people and talk and learn about something that happened 50 years ago,”
Seidule notes.

Whether he’s at the front of a classroom or working with them one-on-one, Seidule prepares his students to be the next generation of leaders and thinkers who can self-reflect, question perceived truths, and unearth new ones — even about themselves. In his Monuments and Myths course, students spend the semester focused on one goal: learn everything there is to know about a Confederate monument of their choosing. Each student researches the historical context that led to its unveiling and prepares a 20- to 25-page paper and a short video to share the findings. Seidule encourages his students to write for other people — like grandparents or other family members — and not for him, an approach that allows students to hone key critical thinking and communication skills.

We’ve needed to change [Confederate monuments] since they were named after people who killed U.S. Army soldiers, renounced the oath of office, and fostered a true slave republic. I’m honored to be part of naming them after true American heroes.

“I tell them, ‘You’re writing to make other people understand what you’re doing and why you’re doing it,’” he says, noting that their work should not only affect the greater historical community but also help local communities think about what to do with monuments in their own backyard. “When you talk to people about a subject they already have an opinion on, you need evidence and expertise, but you also need passion and patience.”

leader among those most interested in dismantling Confederate memorialization, Seidule was appointed by U.S. Secretary of Defense Lloyd Austin to The Naming Commission in 2021, which has provided naming, renaming, and removal recommendations to Congress for all Department of Defense items that commemorate the Confederate States of America or any person who served voluntarily with them. He has served as vice chair on the commission and will finish that work this fall when he testifies before Congress with the results. 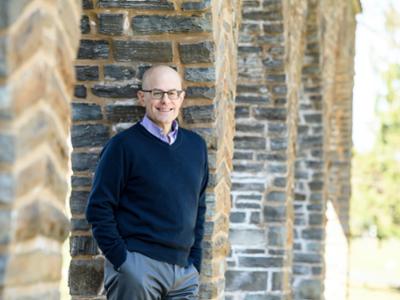 “I’ve been proud and excited to do this work,” Seidule says. “We’ve needed to change these since they were named after people who killed U.S. Army soldiers, renounced the oath of office, and fostered a true slave republic. I’m honored to be part of naming them after true American heroes.”

His books, a video lecture titled “Was the Civil War About Slavery?” with more than 34 million views, his speaking engagements, and his work on the commission have garnered Seidule national and international media attention — along with fans and detractors alike. Not everyone appreciates his efforts to vilify Lee and myth-bust the Lost Cause. That only gives him more reasons to keep going.

“I had a boss in the Army who once said, ‘If you’re not tired of hearing your message and if your staff is not tired of hearing your message, then you haven’t said it enough,” he says, noting that while he doesn’t have a staff, his wife hears every Zoom session, and she’s only a little tired of it. “People accuse me of being a traitor or tell me I don’t love my country. No, I love my country. This is why I’m doing it. I want to make my country better.”

Dive into the findings from Seidule’s latest Monuments and Myths course on Hamilton’s YouTube Channel.

‘History is too important to be boring’ ﻿

Seidule Urges Graduates to “Know Your Own History” ﻿

Ty Seidule, a military historian and the College’s inaugural Chamberlain Fellow, advised Hamilton’s 484 graduates never to stop learning and striving to achieve the College’s motto, Know Thyself. “Know your own history. Know your community’s history. … Keep questioning. Because that is really the only way to know thyself