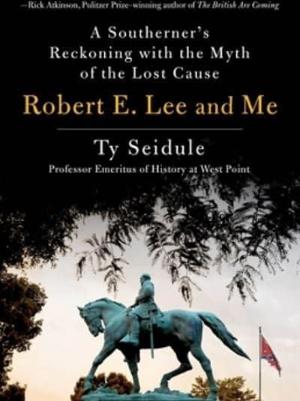 The Hamilton College seal, “Know Thyself” parallels the modus operandi of Chamberlain Fellow and Visiting Professor of History Ty Seidule’s critically acclaimed book, Robert E. Lee and Me.
This past fall semester, I had the great fortune of enrolling in ‘The American Civil War,’ a course co-taught by Professor Maurice Isserman and Professor Seidule. As a retired brigadier general and professor emeritus of history at West Point, Seidule provided students in the class with anecdotes from the years he spent serving the country. In particular, his lectures on battle strategy, weaponry, technology, and conversations regarding slavery and racial tensions that exist today, demonstrate how the Civil War shaped our nation into the country that it is now.

The structure of ‘The American Civil War’ class lent itself to the mission of Seidule’s recently published book, Robert E. Lee and Me; that is, to deconstruct the ‘Lost Cause’ mythology. Professors Seidule and Isserman assigned an essay that called for students to determine how “popular works of art, blending fiction with history reshaped historical memory of the Civil War in the last decades of the 20th century ... including, the ‘lost cause’ narrative.”

Robert E. Lee and Me is a controversial, compelling read. The book opens with an anecdote regarding a video featuring Seidule’s conclusion that slavery was the cause of the Civil War. That video went viral in 2015. Six years later, Seidule still receives hate emails and likely will receive a new batch from ‘Lost Cause’ sympathizers who claim that the Civil War was fought for a variety of reasons unrelated to slavery. At the heart of Robert E. Lee and Me lies Seidule’s conflicting relationship with ‘Lost Cause’ mythology that he was raised to believe and in time has worked to deconstruct.

Throughout the book, Seidule unapologetically champions new Civil War memorials that he argues both change and correct history, describing that “it’s recovering a story lost and creating a more accurate portrayal of the past.” Seidule incorporates personal experiences, such as his childhood in Alexandria, Va., to provide context for his background where he “never understood the repugnant nature of slavery or the powerful history of African Americans in my city.” This book provides a topical analysis regarding how the South lost the Civil War but won the narrative.

The mythology surrounding Confederate General Robert E. Lee is intertwined within this autobiographical and historical account, as Lee represents everything that makes the ‘Lost Cause,’ a false narrative. Seidule writes that “Lee’s decision to fight against the U.S. was not just wrong, it was treasonous. Even worse, he committed treason to perpetuate slavery.”

Seidule raises awareness regarding the implicit bias within the veins of the South toward the treatment of Blacks. The recognition of his own bias is embedded in statements that speak truth to Southerners who are looking outside the walls created by the ‘Lost Cause’ mindset: “We find it hard to confront our past because it’s so ugly, but the alternative to ignoring our racist history is creating a racist future.” In addition to addressing the Southern perspective on freed slaves and Blacks, Seidule incorporates contemporary movements (i.e. Black Lives Matter) into the fabric of the book to promote justice and equality.

This extraordinarily honest book speaks volumes about the cyclical nature of history, treats modern challenges with personal sentiment, and gives a voice to reasons why many Southerners actively chose to believe and promote the ‘Lost Cause’ ideology, even in the modern era. Seidule is a sensational writer who knows his audience, accepts his past, and promotes a greater understanding of this nation’s history through education.

Robert E Lee and Me: A Soldier and Scholar Confronts His Own History

Seidule Urges Graduates to “Know Your Own History” ﻿

Ty Seidule, a military historian and the College’s inaugural Chamberlain Fellow, advised Hamilton’s 484 graduates never to stop learning and striving to achieve the College’s motto, Know Thyself. “Know your own history. Know your community’s history. … Keep questioning. Because that is really the only way to know thyself

‘History is too important to be boring’ ﻿

Ty Seidule, a visiting professor of military history and retired brigadier general, is an expert on Confederate memorialization and the Lost Cause — the notion that the Confederacy was a doomed but noble undertaking is particularly attuned to the ways in which the war and its aftermath shaped American culture.