Why do birds typically live longer than mammals?

Why do birds typically live longer than mammals? A new paper offers a hint, albeit not a conclusive answer.  Assistant Professors of Biology Cynthia Downs and Ana Jimenez at Hamilton and Colgate University respectively have co-authored a paper with nine students, “Does cellular metabolism from primary fibroblasts and oxidative stress in blood differ between mammals and birds? The (lack-thereof) scaling of oxidative stress” in press with Integrative and Comparative Biology.

The research group focused on testing whether birds and mammals have differential patterns in cellular metabolism as expected because of their difference in whole-animal rates of energy use. They also tested whether birds had higher antioxidant concentrations to ameliorate the higher concentrations of reactive oxygen species. One of their goals was to determine if birds and mammals differ in the amount of damage caused by the balance of reactive oxygen species and antioxidants concentrations (oxidative stress).  Because whole-organism rates of energy use also changes in a predictable manner, another goal was to determine if components of oxidative stress changed with body size.

Their results suggest that cellular rates of energy use, total antioxidant capacity, damage to lipids and an enzymatic antioxidant (i.e., catalase activity) were significantly lower in birds compared with mammals. “We found that cellular rates of energy use and measures of components of oxidative stress didn’t differ with body size. We also found that most oxidative stress parameters significantly correlate with increasing age in mammals, but not in birds; and that correlations with reported maximum lifespans show different results compared with correlations with known aged birds,” authors Downs and Jimenez explained. “We also conducted a literature search and found that measurements of oxidative stress for  birds in basal condition are rare.”

According to the authors, this is one of the first cross-species studies of oxidative stress that compares birds to mammals in an attempt to understand differences in why birds live longer than mammals of the same body mass despite the fact that they have higher rates of energy use.  Their results suggest that birds demonstrate overall lower levels of oxidative stress, which may or may not be linked to their longer lifespans.  The authors plan to focus on within species differences in oxidative stress and the link to immune defenses in the future. 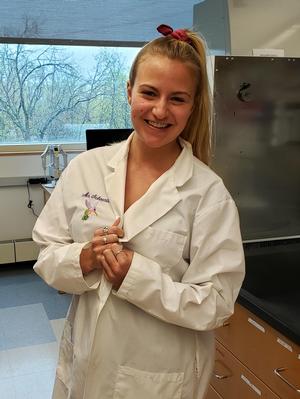 Ellen Chinchilli ’21 in the lab