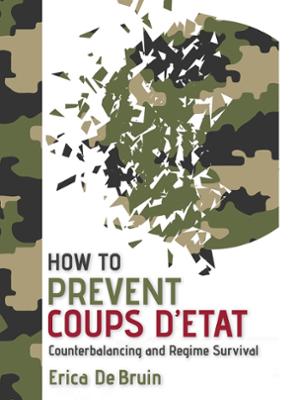 Intro: After nearly a decade of research, Assistant Professor of Government Erica De Bruin published a scholarly book at a moment when its subject unexpectedly emerged as a hot topic in the U.S. How to Prevent Coups d'État: Counterbalancing and Regime Survival was published by Cornell University Press. We asked De Bruin a few questions about it. The interview has been edited for length and clarity.

The book landed amid public discussion around how President Trump’s refusal to accept his electoral defeat might amount to an attempted coup. What are your thoughts on that?

I never expected that anyone would think this book would have relevance for the United States, so we’re in an extraordinary political time right now. I understand there’s been a great deal of concern about President Trump’s refusal to accept the results of the election. But while the steps Trump and other Republican officials have taken to discredit the election are enormously damaging, I do not think they constitute a coup attempt. Scholars generally understand coups to be illegal, overt attempts by civilian or military elites to overthrow a sitting executive. There are a lot of features of the current situation that don’t fit that definition. Nothing the Trump Administration has done yet is illegal. He is currently the president and has not yet attempted any overt steps that I have seen to prevent Joe Biden from actually assuming power. And I just don’t see that he would have the backing of the military. Coup attempts involve the use or threat of force, and that usually has to come from the regular military.

Even if you’ve got pro-government militias, street gangs, or people in local police forces that would support an effort to keep Trump in power, that’s not enough; you would actually need military backing. But the military in the United States has become more diverse in recent years, and Trump has lost support within it. At this point, I wouldn’t consider it to be an incredibly conservative leaning organization. Most importantly, the military in the United States really has a sense of professional ethics and responsibility and has internalized the norm of not interfering in politics in that kind of direct way. And so I’m possibly more optimistic than others, but I think that what we’re seeing is better described as democratic backsliding than an overt coup attempt.

Counterbalancing is one of the most common strategies that rulers use to try to prevent military coups. It involves dividing the state’s coercive power into multiple, competing organizations. This might include a presidential guard, republican guard, militarized police, or militia. They build those forces in addition to a regular military. The crucial thing here is that counterbalancing forces report to the regime independently from the military chain of command. So they might be under a ministry of interior or report directly to the executive, and they have access to the centers of power that are the targets of military coups. The hope is that they would be able to intercept any coup attempt that’s staged.

What do you hope readers will learn from the book?

I’d hope for two main takeaways. The first is that, in many respects, counterbalancing works. When coups are staged against rulers that counterbalance, those coups are less likely to succeed. This can help explain why leaders keep using this strategy, even though it can be detrimental to their own military effectiveness and can create incentives for repression against civilians.

The second takeaway is that while counterbalancing works, there’s a real cost to it. I show in the book that it doesn’t actually deter coup attempts. It makes them harder to carry out successfully, but it doesn’t stop soldiers from trying to seize power. In some cases, it can actually provoke new coup attempts because it can generate resentment and anger within the armed forces. It also increases the risk that any coup attempt might escalate to civil war. So there are real costs to the strategy.

How did you get interested in this particular area of scholarship?

I was in graduate school when the Arab Spring happened, and that was a time when militaries played a really prominent role in helping shape the outcomes of those conflicts. Where they defected from the regimes that were being challenged by a protest, those regimes fell. Where they repressed protesters, those regimes either remained in power or it escalated into a civil war. So I started thinking more about the political role of the military, and I saw that there had been this rich scholarship about military coups in the 1960s and 70s in particular, but scholarship had really fallen off in recent decades. We didn’t have any systematic studies of the strategies that rulers were using to prevent coups. We’d seen over time that coups became less common, but we didn’t have a good explanation as to why that was the case.

When I started this project, some people told me not to do it because they said coups don’t happen anymore. But while coups are not as common as they once were, they do continue to happen — in the past two decades, there have been more than 50 coup attempts globally. I think that in the context of ongoing democratic backsliding and erosion, we are likely to see coup attempts continue. So it just felt to me like an important thing to do to try and understand how we could potentially stop that from happening.