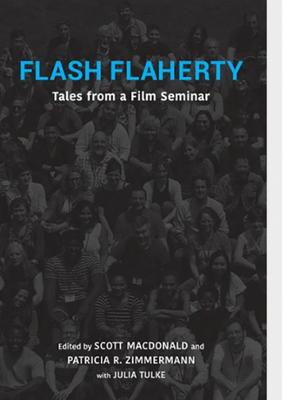 A new book, co-edited by Professor of Art History Scott MacDonald, was recently published by Indiana University Press. Flash Flaherty: Tales from a Film Seminar uses personal recollections of attendees of the Robert Flaherty Film Seminar to present a history of an event that is now in its 66th year.

The volume is described by the publisher as “a collective polyphonic account that moves freely between funny anecdotes, poetic impressions, critical considerations, poignant recollections, scholarly observations, and artistic insights.”

MacDonald’s co-editor was Patricia R. Zimmerman, a professor of screen studies at Ithaca College’s Roy H. Park School of Communications. Flash Flaherty is a follow-up to their 2017 volume, The Flaherty: Decades in the Cause of Independent Cinema.

The Flaherty Film Seminar started at the Flaherty farm in Vermont in 1954 as a small gathering of filmmakers and students, invited by Robert Flaherty’s widow, to look at Flaherty’s films and his filmmaking vision.

That first meeting grew into an annual week-long event that includes as many as 200 Flaherty enthusiasts. Now held at Colgate University, over the years it has been held in various U.S. locations, including at Vassar, Wells, and Duke, and also in Latvia and Israel.