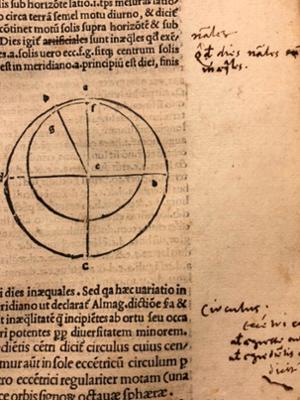 It’s one thing to learn about history, but another to touch and feel and be a part of it. From anarchist periodicals of the 1920s to a 16th-century copy of Aesop’s Fables to paintings of 19th century everyday life in China, Hamilton’s Special Collections is a trove of fascinating publications and ephemera. More importantly, it is a repository of primary source material for students and faculty to conduct research.

“That’s what the Special Collections can provide,” said Philip Chivily ’23. “It was very emotional to have a 500-year-old book in front of me that’s survived this long.” Chivily was referring to a book on physics he had the chance to study as part of Assistant Professor of History Mackenzie Cooley’s The Scientific Revolution: Making Knowledge in the Early Modern World course. On investigation, he noted margin notes, or marginalia, in the book and asked if he could translate them from the Latin for his final project. 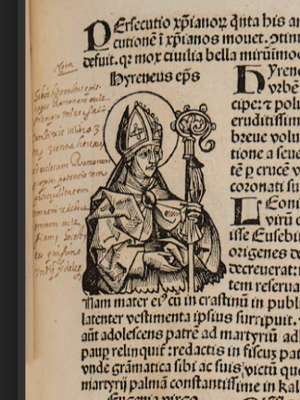 Chivily discovered an intriguing conversation, begun in 1583 by one scholar who supported Aristotle’s theory that the sun revolved around the earth, and concluded by another scholar in 1613 who argued Copernicus’ theory that the earth revolves around the sun. This spring Chivily launched into translating the marginalia in the Nuremberg Chronicles, a copy of which is also in Special Collections

Two courses taught by Jane Watson Irwin Professor of Literature Margaret Thickstun use the Special Collections in relation to Frederick Douglass’ Narrative and other book and pamphlets related to abolition.

“My students remark both about reading the Douglass Narrative and the trip to Special Collections that they feel the human horror of slavery more profoundly when hearing specific stories and looking at the names and characteristics of individuals than they do when reading about the statistics of slavery.

Jewels in the Crown

Anchored by, but hardly limited to, three major collections — the Beinecke Collection on the Lesser Antilles; the works and papers of poet Ezra Pound, Class of 1905; and imprints by and about American communal societies — the holdings in Hamilton’s Special Collections and Archives are Burke Library’s gems.

“It is very unusual for undergraduates — especially first-year students — to be able to touch materials in a rare book room. I usually take each of these groups over earlier in the semester … and enjoy the looks --and often sudden movements -- when someone realizes she is touching animal skin. And the most surprising thing I have learned: They can't read cursive.”

“We have such an amazing array of materials,” Thickstun said. “Just this week, during a presentation Christian gave about Special Collections, he mentioned a 17th-century edition of Paradise Lost that I did not know we owned.”