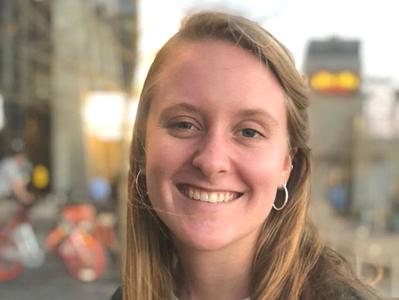 Alexandra (Allie) Gale ’19 has been awarded a Fulbright English Teaching Assistantship to Brazil. A world politics major with a focus in Latin America, Gale was a Rotary Youth Exchange student in Joao Pinheiro, in the state of Minas Gerais, Brazil, in 2014-15.

“I chose to apply for the Fulbright in Brazil since my time in Brazil had been so meaningful to me,” said Gale. “During my gap year, I learned to speak Portuguese, became part of a community, and made great friends that I still keep in touch with. My time in Brazil inspired me to pursue my world politics major at Hamilton,” she said.

read about other fellowship recipients

At Hamilton Gale is a senior admissions intern and was finance intern for the (Anthony) Brindisi for Congress campaign last fall. She has also served as an Orientation Trip leader and spent last summer as a research intern at the Global Policy Group in Washington, D.C.

Gale said she is anxious “to return to a country that shaped my path, and to be able to reengage with a new community.”

When she returns to the U.S., Gale said she is interested in possibly working in the field of international security or consulting, but is still deciding.