Madagascar is famous for the endangered creatures, primates that look  like a cross between a cat,  squirrel and dog. Guzzetta, an intended biochemistry major, is undertaking this research under Dr. Patricia Wright, head of Centre ValBio and professor at Stony Brook University. 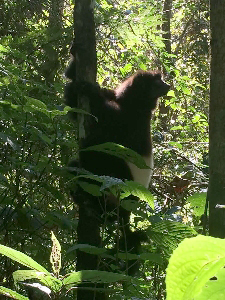 “There are two parts of this research that I’m working on,” explained Guzzetta. “I’m continuing a longitudinal behavioral study on the Propithecus edwardsi, or Milne-Edward's sifaka lemur, that Dr. Wright first began working on in 1987. This work involves trekking through the mountainous rainforest daily with three to four guides, a climate change researcher, and a Malagasy student to find specific, known groups of sifaka lemurs.”

After finding a group of lemurs, one specimen is singled out for observation. Data includes the animal's identification name and gender, group name and site, date and time, current behavior, such as resting, feeding, self-grooming, mutual-grooming, traveling, trail location, height, what the individual is feeding on, who is nearest to the individual, and the current weather.

These data points are recorded in a waterproof “rite-in-the-rain” field notebook, then transferred into electronic files upon the groups return to the research station. 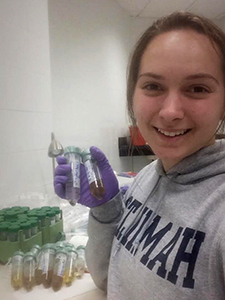 The second aspect of Guzzetta’s research consists of the collection of fecal samples from the animals, to be analyzed upon return to the United States.

Of particular interest in fecal samples are the present microbiomes (DNA of the gut’s bacteria), said Guzzetta, adding that “in my lifetime there has been huge progress in the field of genetics and what we can do with the information we gather, and more is being discovered about genetics every day. However, microbiomes are often ignored, even though they may hold the answers to hundreds of questions that basic genome studies haven’t been able to solve.”

As is often the case, however, the benefits of research abroad are not merely academic. Guzzetta remarked that researching lemurs in the rainforests of Madagascar has been an incredible experience, both academically and culturally. “I’ve gained insight as to what life is like as a field researcher and primatologist – both the ups and downs,” she said. “I’ve learned that working with wild animals in foreign countries is an attainable option for me, and is a great way to assist conservation efforts.... But some of the biggest impacts don’t come from doing research. I have learned more from the people of Madagascar than I could have imagined.”

Guzzetta noted that she has met incredible people “who are happy even though they live in houses of clay and sticks, and must work their fields daily in order to have food the next day. Many don’t have shoes, roads, electricity, access to medicine, or even clean drinking water – several things I’ve taken for granted in America,” she remarked.

“Yet even with these hardships, these people are so resilient and happy, and the communities of people seem to care for each other in ways that I’ve never experienced in any other place that I’ve traveled to. So, while the project itself has had a huge impact on my life, I cannot discount the impact that living in Madagascar has had on me as a whole.” 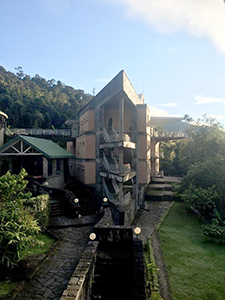 Guzzetta plans to continue her education after Hamilton, possibly in the field of veterinary medicine. “I've had a passion for animals all my life, and can easily see myself working in an animal-related field. “ She is also interested in continuing learning about genetics and pursuing further genomic research in the future.

“Microbiomes are particularly interesting, since we are still learning about the tremendous impacts our microbiomes can have on who we are,” Guzzetta concluded. “For example, certain identifiers in human microbiomes can indicate a high risk of certain types of cancer or diseases. The field of genetics is massive, and is only expanding.”