In 2019, a team of Hamilton College staff and students traveled to the island of Nevis, birthplace of the College’s namesake Alexander Hamilton, to collaborate with staff members from the Nevis Historical and Conservation Society.

Their goal was to digitize records in fragile physical condition and/or of significant historical value, including minutes of the Nevis Council, baptismal records from Anglican churches, and the only known printed copy of the Laws of Nevis (ca. 1773).

By Tuesday, we had stopped using full sentences. What had started Monday as “OK, turn the page, please” had transformed into the simple statement “Turn” in less than 24 hours as we worked to salvage preservable materials from the collection at the Nevis Historical and Conservation Society (NHCS).

Over the course of the week in June, we met several people from the society, including NHCS Director Jahnel Nisbett and NHCS assistants Arcquela Bendeito and Jonathan Ward. Nisbett will be visiting Hamilton in March 2023 as part of "Diversifying Collections," a series of events hosted here, and at Williams, Smith, and a few other institutions. 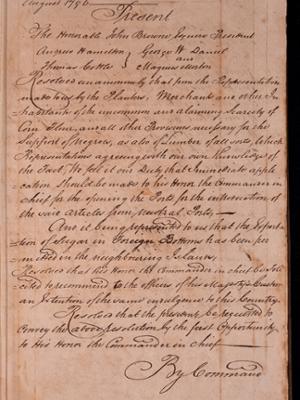 Our job was to photograph archival texts of increasingly deteriorated states, some even containing alarmingly fluorescent shades of purple mold. Goodwillie and Peaslee worked on one setup, and Atherton and I on the other. Katz created and populated an online repository for the NHCS.

“The records of Nevis are rare in that they allow the historian to investigate a small island nation of world historical importance,” Goodwillie said. “[We hope] that by preserving them digitally, and making them discoverable and accessible, we can open that history up to the world to show that Nevis is not a ‘forgotten spot in the Caribbean,’” he added.

Atherton and I switched jobs by book, one person taking the picture, the other holding the book flat and flipping the pages. We propped books up on blocks or other books, used rulers Goodwillie had made from clear plexiglass to make visible words written too close or into the binding, and contorted our arms in awkward angles to help long-closed books to lay flat. We photographed the books one side at a time, first taking the rights, then flipping the book around, replacing the SD card and taking the lefts. The monitor we utilized displayed the image number after each photo was taken, and we would cheer when we had the same number of images on each side.

Peaslee took the digital images we captured of each text back to Hamilton where she will put them in correct order for a final master copy. We digitized 20 texts while there that together contain the history of a small island whose 18th-century economic output — built on the backs of enslaved Africans — eclipsed the totality of Britain’s North American colonies combined.

“The slave plantation-based industrial production of sugar forms a sobering foundation for Nevis’ history,” Goodwillie said. “These records reveal evidence of the lived experience of Nevisians of both European and African descent. They reflect the international tensions that affected the island’s security from its 17th-century settlement through the period of the Napoleonic Wars in the early 19th.

Goodwillie said the records contain detailed descriptions for the construction of fortifications and courthouses, and regulations governing trade and religious freedoms. “Additionally, the manuscripts contain information about the enslaved population, especially the Council Minutes covering the period of emancipation in the mid-1830s that record the complex processes at work to determine how the newly freed people would be housed and educated.”

A side benefit of our work at the society was having the opportunity to experience Nevis. This included meals at the inn, playing Cribbage, and time at the beach. Importantly, for my intended career in the historical field, I now know how to properly digitize texts. As I learned last winter in Italy working on a research project with Assistant Professor of History Mackenzie Cooley, taking hurried pictures of books with my iPhone is not conducive to easy readability. Perhaps, more importantly, I got a chance to know the lovely people with whom I undertook this expedition.

In 2019, a team of Hamilton College staff and students traveled to the island of Nevis, birthplace of Alexander Hamilton, to collaborate with staff members from the Nevis Historical and Conservation Society. Their goal was to digitize records in fragile physical condition and/or of significant historical value, including minutes of the Nevis Council, baptismal records from Anglican churches, and the only known printed copy of the Laws of Nevis (ca. 1773).

In January, three Hamilton students abandoned the frosty Upstate New York winter for the tropical climate of Nevis, the Caribbean birthplace of the College’s namesake Alexander Hamilton. Kayley Boddy ’22, Skylar Havens ’20, and Samantha Wilkerson ’22 spent a week at the Nevis Historical and Conservation Society (NHCS) in St. Kitts and Nevis digitizing records pertaining to Hamilton’s life with the assistance of NHCS staff and Hamilton's Director and Curator of Special Collections and Archives Christian Goodwillie and Digital Imagery Specialist Marianita Peaslee.