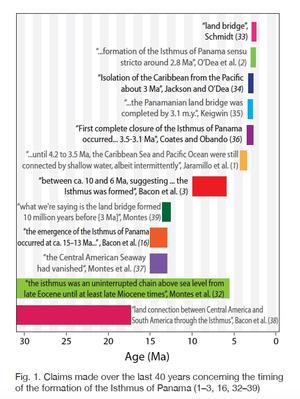 The authors of the letter argue that the conclusion of Jaramillo et al. (2017) that there had been transisthmian speciation events that predated the completion of the land bridge is precisely what they and tens of other studies have concluded. They state that deep water species are more likely to diverge before shallow water species and extinction can remove sister species that can result in extant species appearing to be sister, when in fact they are members of previously separated sister clades.

“The backwards spread in divergences is fully expected, and indeed, should be extensive in marine Tropical America where extinction rates have been high, but this pattern does not support the existence of earlier intermittent land bridges,” the letter notes.

Coppard and his co-authors conclude that the remaining question is therefore not when the Isthmus formed, but how wide, deep, and strong were the interoceanic seaways during the time from initial collision of the Panama Arc ~23 Ma until final formation in the Pliocene.