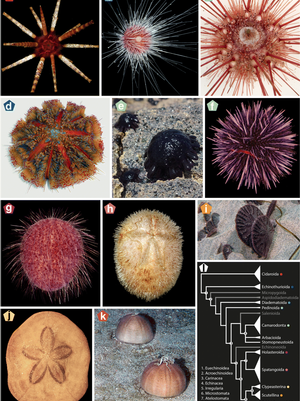 A paper titled “A phylogenomic resolution of the sea urchin tree of life,” co-authored by Scholar-in-Residence Simon Coppard, was recently published in the journal BMC Evolutionary Biology. The article was written with Nicolás Mongiardino Koch and Derek Briggs of Yale University, Harilaos Lessios of  the Smithsonian Tropical Research Institute, Rich Mooi of California Academy of Sciences, and Greg Rouse of Scripps Institution of Oceanography.

According to the researchers, the diversity of the more than 1,000 sea urchin that exist today traces its roots back to at least the Permian (shown in the figure at right). They note that “although a lot of work has been devoted to elucidating the echinoid tree of life using both morphology and molecular phylogenetics, previous molecular attempts have relied on only a handful of genes, which have had limited success at resolving the deepest nodes of the tree.”

The authors performed de novo sequencing and assembly of 17 transcriptomes to complement available genomic resources of sea urchins and produced the first phylogenomic analysis of the clade. 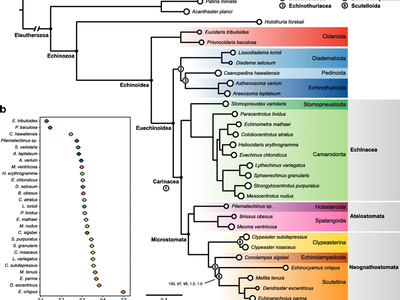 Their results, shown in the figure here, deviate from the currently accepted classification of sea urchins, with neither Acroechinoidea (all euechinoids except echinothurioids), nor Clypeasteroida (sand dollars and sea biscuits) being monophyletic as currently defined.

In their paper, the authors show that phylogenetic signal for novel resolutions of these lineages is strong and distributed throughout the genome and not the result of systematic biases in their analyses.

“We offer a detailed assessment of evolutionary scenarios that could reconcile our findings with morphological evidence, opening up new lines of research into the development and evolutionary history of this ancient clade,” they stated.