It’s one thing to read a news article. It’s another to hear directly from a person living through the ordeal of war.
Students in Visiting Assistant Professor of Government David Rivera’s two courses, Politics in Russia and Introduction to International Relations, and Linowitz Professor Robin Quinville’s seminar, America’s Alliances and Challenges for the Future, gained a rare glimpse into their Ukrainian contemporaries’ lives when several dozen students studying English at the Ivan Franko National University in L’viv joined them for a teleconference last week. 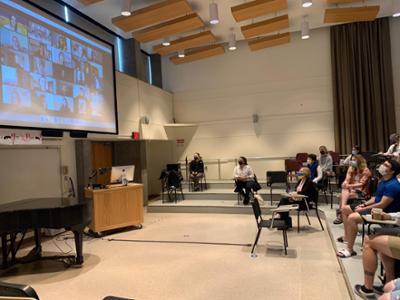 During the hour-long conversation, organized by Professor of Government Sharon Rivera, the Ukrainian students shared stories about their continuing studies during the war, concerns over one or both parents actively engaged in fighting, and their fears and hopes for the future, among other topics.

Peter Butler ’23 said that although he had viewed various news reports on the developments of the Russian invasion since it began in February, hearing directly from Ukrainian students deepened his understanding. “Listening to stories from students my age really helped me remember the often less reported, human side of the conflict. I was able to better comprehend how dramatically their lives have changed in the past 70 days,” he said. “I encourage other students to find resources to hear first-hand accounts of daily life in Ukraine, as it has reaffirmed my understanding and helped me better appreciate the severity of this crisis.”

Gabrielle Nakkab ’25 agreed. “Hearing from the Ukrainian students about the challenges they’ve faced since Russia’s invasion was emotional,” she said. “Now more than ever, I appreciate how privileged I am to be able to see my friends every day, learn, and call my family without fear that they are unsafe.”

Nakkab noted the resiliency of the Ukrainian students. “It was incredible to learn that some of the students we spoke with are the English translators of the Ukrainian articles we read here in America,” she said. “The Ukrainian community has seemingly become stronger and more united amidst the war, and such collective national pride is truly inspiring.”

The event was part of the Ukraine Assistance Effort that Sharon Rivera is coordinating in collaboration with faculty in the Russian Studies Program and the Levitt Center. “We identified several concrete ways that we might be able to help, including organizing additional teleconferences with university students, offering English language instruction to Ukrainians, and hosting a film festival devoted to Ukrainian cinema,” she said. “These are in addition to participating on panels aimed at educating students, faculty, and staff about the war and disseminating information about humanitarian efforts in Ukraine to which we can contribute as individuals.”

Rivera received a grant from the Levitt Center’s Faculty Innovation Fund that will be used to lay the groundwork over the summer for a fall launch of these initiatives.