On the first floor of the Kennedy Center for Theatre and the Studio Arts, Assistant Professor of Digital Arts Anna Huff teaches the class of her dreams.

Listed in the course catalog as DARTS-319: TV CLUB, the single-credit advanced class explores how live video broadcasting can be a method for collectives to bond with one another. It is a course that Huff has been waiting to teach for years, and she has found Hamilton’s digital arts and studio resources a perfect fit for a class like TV CLUB.

Specifically, Huff has her students look at 1980s-90s public access media culture and its connection to social activism. Students are in charge of creating a weekly show geared toward cultivating and learning more about their community on campus.

“I want [my students] to have considered the history of video art, media activism, and public access television culture and how they’ve transitioned from a broadcast landscape into live streaming,” Huff explained.

The community aspect of TV CLUB is one of senior Theatre major Juliet Davidson’s favorite things about the class: “It’s been really great to work as a collective as opposed to alongside one another. This way, we’ve been able to create cohesive programming that appeals to our campus audience.” 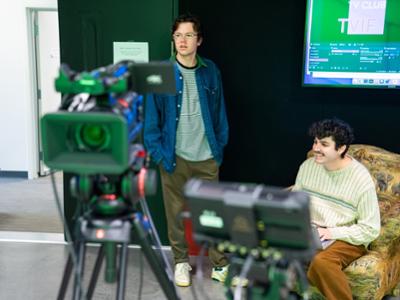 The community aspect also appeals to senior Theatre major Carlo Benavides, who said that one of his favorite things about the class is all the roles the students play to create a single broadcast. Learning how to adapt and change to meet the needs of every broadcast has been fun for him. “I have been a production assistant, member of a live studio audience, camera operator, and content curator among plenty of other roles,” he said. “This class is built on the community and collaboration of all of us taking it.”

In class, students watch television and online video content they find interesting. This content influences how they create their own live space aesthetically and formally, a fact to which Davidson can attest: “I’ve taken classes with Professor Huff and found them really creatively stimulating.”

In addition, occasional visitors from other collectives who cultivate their own media spaces have joined students for discussions. One such group that will visit on Dec. 9 is Phasespace Collective. Its members share a living space that they turned into a public resource area in Brooklyn. According to their website, they are “dedicated to the exploration of video, sound, performance, creative coding, math and science, and interdisciplinary art practices.”

Plans are underway to broadcast the shows to more screens across campus. Tune in to the Hamilton TV Club YouTube channel for new shows on Fridays at 10:30 a.m.

Huff cites her students’ surprising and continuous creativity as one of her favorite things about teaching. When discussing the open curation of an educational experience as a professor, she said, “You can’t be too overdetermined about what should or shouldn’t happen, especially not with creative work.” 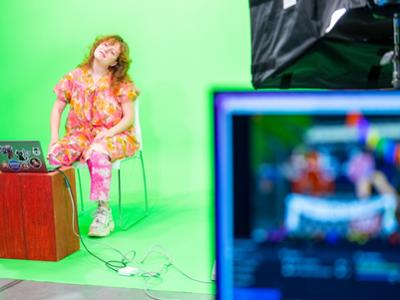 Some students, however, want more direction and guidance than others when it comes to what kind of show to put on every week. As a preliminary guide, Huff has broken down the semester’s livestreams into different categories, but ultimately, she does not want to hold anyone back from doing what they want to do. TVIF’s recent broadcasts focused more on live performances. Students produced content ranging from live dance and music performances, to a game show about drawing and painting corporate logos from memory.

From using digital media to communicate and collaborate to exploring the potential uses of data, analytics, and computer modeling, we’ll help you navigate the ethical and societal implications of living in an online world.

There is little that aptly summarizes this class’ driving mission besides its very name, as Huff explained: “I wanted to use the word ‘club’ because it has an interesting history of conveying both a sense of exclusivity and a sense of belonging and access.” In TV CLUB, students not only gain skills in putting on a show regularly, using applications such as OBS, and thinking critically about the history of media collectives, but they also gain a community.

Huff credits the hard work and collaborative support of LITS instructional designer Forrest Warner who, she said, has been collaborating with her on the live streams, and ensuring the equipment is running smoothly. “He has been a huge part of the success of the course.”

Behind the scenes of Anna Huff's TV CLUB class. Photos by Zack Stanek.

The existential themes of love, death, and time were explored in the AI-scripted and human-performed musical production Channelers, an interdisciplinary art project funded by the Dietrich Inchworm Grant and headed by Assistant Professor of Digital Arts Anna Huff.

Mixing the Creative & Digital into an Independent Concentration ﻿

Mix a passion for technology and design with a self-motivated student focused on crypto, NFTs, blockchain, and the metaverse, and you have the ingredients for a personalized concentration that combines art and computer science.