NY Program: A Day at The Met

Participants in Hamilton’s fall 2017 New York City Program recently had the opportunity to experience a docent-led tour through one of the world’s most celebrated art collections, The Metropolitan Museum of Art. Since it is impossible to grasp all that the museum houses in one day, the docent highlighted a few select works and delved deep into layers of the art in a way that an untrained eye might not have otherwise appreciated. 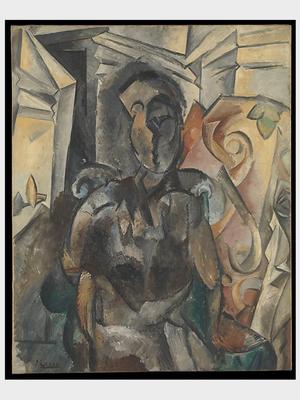 One piece by Pablo Picasso, “Woman in an Armchair,” enthralled the group. At first glance, many struggled to understand what exactly they were looking at. Once docent Annette Adler outlined the general form of the figures, they started to stand out—but still many in the group struggled to grasp the concept of the painting. It was only when Adler explained how Picasso was able to dissect the objects he was painting into geometric pieces and then reassemble them on the canvas, that the concept came to life.

Adler used the analogy of tearing apart a Styrofoam cup and then piecing it back together, but in a different arrangement than the original. Her description allowed the group to much better visualize and appreciate Picasso’s style of presenting different points of view simultaneously.

Nearing the end of the tour, the group’s financially focused mindset was noticeable when one participant asked which painting in the collection is the most expensive. Adler explained that value within art is much more than a cut-and-dried number; rather than discounting cash flows to present value, artwork depends on individuals own preferences. “Art’s value is solely derived from the eye of the beholder,” she said.

A piece of artwork that the group all thoroughly enjoyed was one of Jackson Pollock’s famous drip paintings. The group sat down in front of this enormous piece as the docent explained the intricate process employed by Pollock during the creation process. The dense nature of the painting kept the group stimulated for an extended period as new designs and patterns continued to emerge.

The group appreciated the opportunity to experience more of New York City and its thriving art culture.