Hamilton College had its beginnings in a plan of education drawn up by Samuel Kirkland, missionary to the Oneida Indians. The heart of the plan was a school for the children of the Oneidas and of the white settlers, who were then streaming into Central New York from New England in search of new lands and opportunities in the wake of the American Revolution.

In 1793, the missionary presented his proposal to President George Washington in Philadelphia, who “expressed approbation,” and to Secretary of the Treasury Alexander Hamilton, who consented to be a trustee of the new school, to which he also lent his name. The Hamilton-Oneida Academy was chartered soon thereafter. On July 1, 1794, in ceremonies attended by members of the Oneida Nation, the cornerstone was laid by Baron von Steuben, inspector general of the Continental Army and “drillmaster” of Washington’s troops during the War for Independence.

The academy remained in existence for nearly 20 years. It faltered, almost failed, and never came to serve Kirkland’s original purpose, which was to help the Oneidas adapt to a life in settled communities. In fact, few Oneidas came to attend the school, and its students were primarily the children of local white settlers. Yet the academy remained the missionary’s one enduring accomplishment when, a few years after his death, it was transformed into Hamilton College. 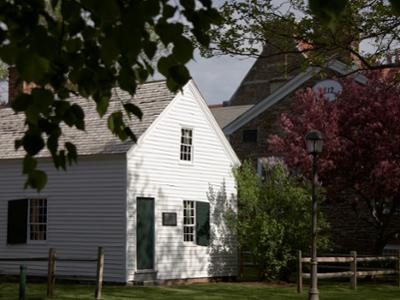 The new institution of higher learning was chartered in 1812. The third college to be established in New York State, it is today among the oldest in the nation. Its history has been both long and eventful. After surviving dire difficulties in its early years, the College began to flourish in the period prior to the Civil War. Throughout the 19th century, however, it remained steadfast in its adherence to a traditional classical curriculum. Its students (all male), drawn almost entirely from the small towns and rural areas of Upstate New York, were expected to enter well-prepared in Greek and Latin. They continued to receive generous instruction in those languages, as well as in philosophy, religion, history, and mathematics, throughout their stay on the Hill. In that respect, Hamilton was not unusual among colleges of the time. However, there was a greater emphasis on "rhetoric and elocution" than at other schools, and public speaking became, and to some extent remains, a Hamilton tradition.

College life in the 19th century was rigorous. Students studied by lamp and kept warm by fires fueled with wood that they themselves had gathered. Each morning, they met in Philip Hooker’s unique three-story chapel to hear a lesson, usually from the president. Although the requirement of chapel attendance has long since disappeared, this most beautiful of the College’s buildings continues to dominate the central quadrangle. The social activities of undergraduates, left mostly to their own ingenuity and direction, led to the early growth of literary societies, which sponsored programs of declamation and debate. Social fraternities were first formed on campus during the 1830s, and several continue to exist today. Athletic activities of the informal variety were the rule until the end of the century, when organized intercollegiate sports began to appear.

As the College entered its second century in 1912, Hamilton was preparing itself for the modern era. Under President Melancthon Woolsey Stryker (1892-1917), an ambitious building program had resulted in facilities that were the envy of peer institutions, and the curriculum had been substantially revised to accommodate modern languages and the sciences. However, it was under President Stryker’s successor, Frederick Carlos Ferry (1917-1938), that Hamilton achieved solid academic status among America’s leading liberal arts institutions. Actively supported by Elihu Root, Class of 1864, the distinguished statesman and Nobel prize laureate who was chairman of the Board of Trustees, President Ferry nurtured Hamilton as a place of the finest teaching and learning. The work of modernizing the curriculum was continued, and a comprehensive and innovative athletic program was introduced encouraging amateur enthusiasm and widespread participation.

In the aftermath of World War II, the pace of change accelerated. The student body was expanded and, thanks to a large and ever-growing pool of applicants, its quality was enhanced as well. The faculty also grew in size and stature, and the social sciences became a more vital part of the curriculum through incorporation of course offerings in anthropology, economics, and government.

Perhaps the most revolutionary change of all occurred when Hamilton established a sister institution, Kirkland College, in 1968. The faculty of this new college thought seriously about what liberal arts education should be like for women and developed a curriculum that fostered independence, creativity, and self-reliance. As an experimental institution, Kirkland offered programs that supplemented and enhanced the traditional liberal arts curriculum. Students on College Hill enrolled at either Hamilton or Kirkland, but selected courses from both institutions and shared facilities, such as the new Burke Library. The two colleges merged in 1978. Today Kirkland’s legacy includes an extraordinary faculty and facilities in performing and studio arts, and a strong commitment to experimental education and to interdisciplinary perspectives.

In recent years, the curriculum has been further expanded to incorporate interdisciplinary concentrations and programs such as Africana, American, Asian, Latin American, environmental, and women’s studies as well as digital art, computer science, and public policy. An emphasis on writing and speaking — long-standing Hamilton traditions —remains at the heart of the curriculum along with capstone experiences such as the Senior Program that allow students to integrate and demonstrate what they learn. The College's facilities have been continuously renovated and expanded, providing students with access to an exceptionally modern campus for both academic and extracurricular pursuits. Among the more recent developments are the state-of-the-art Science Center (2005); the Charlean and Wayland Blood Fitness and Dance Center (2006); major expansion and renovation of the Kirner-Johnson Building (2009); the Sadove Student Center at Emerson Hall (2010); the Ruth and Elmer Wellin Museum of Art (2012); the Kevin and Karen Kennedy Center for Theatre and the Studio Arts (2014); and the Joel and Elizabeth Johnson Center for Health and Wellness (2018).

The College that evolved from Samuel Kirkland’s plan of education celebrated the bicentennial anniversary of its charter in 2012. Far from the modest frontier school for white and Oneida children that the missionary envisioned, it has become an institution of higher education that draws its students from all areas of our country and even beyond our borders. Although Hamilton remains small by present-day standards and currently has a student body of fewer than 2,000, it provides resources and facilities comparable to those of undergraduate institutions substantially larger in size. While faithfully maintaining the tradition of liberal learning in a comfortably intimate environment, Hamilton has responded to changing needs and circumstances in preparing its students for a world unimagined by Samuel Kirkland in the days of our nation’s infancy.