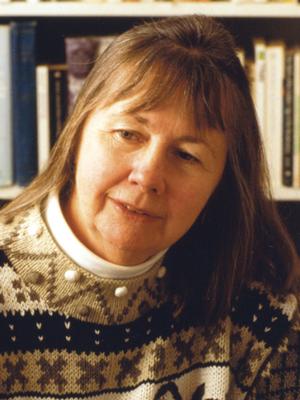 I suspect that Carol Rupprecht would not have wanted this memorial minute. Carol was an extremely private person, and she shied away from the spotlight. She refused to have a public celebration when she retired. In fact, she didn’t care for ceremonies at all. The one time I can remember her getting angry in public was in 1996, when she was awarded the Christian Johnson Excellence in Teaching Professorship. As most of you know, such awards are announced, without prior notice to the recipients, at Class & Charter Day; and the dean’s office was understandably concerned that she might not show up for the event. So some mild pressure was put on Carol to attend. Almost anyone else would have recognized that something was up; but because of Carol’s modesty and her indifference to such occasions, she could only assume that this was some kind of administrative bullying, and she let her thoughts be known throughout Root Hall. Needless to say, she was mortified (and profusely apologetic) when she learned the truth.

That professorship was richly deserved. Carol came to Kirkland College in 1974, and was one of the founders of the new Comparative Literature Department after the merger. Her literary field was the Renaissance, with a special focus on Shakespeare and Dante, and her primary interests were translation theory and the intersection of literature and psychology, particularly dreams. She was for many years the senior editor of the journal Dreams, which she helped found; and she was one of the founders of the Connecticut Association for Jungian Psychology. During her years here, she was a productive scholar, editing two collections and writing a series of thoughtful, elegant, and finely polished essays, most of them on dreams and archetypal feminist theory. Our colleague Vicky Vernon describes Carol’s special critical gift with eloquence: “Those privileged to read her scholarship, whether in stages of preparation or publication, discovered in its pages a subtle and supple mind able to tease the shapes and shadows on the borders of our consciousnesses into a sharper focus.” Carol also did her share of administrative work, chairing the department for five years and serving as associate dean.

But on the Hill, I think it’s fair to say, Carol’s primary interest was in teaching, and her courses, from the day she got here to the day she retired, were adored by her students. Her success as a teacher stemmed in part from her almost palpable passion for literature, in part from her deep commitment to students as individuals. Of course, many of us try to combine enthusiasm for our subjects and concern for our students; but Carol did so in a particularly profound way, because, from her perspective, they were simply two aspects of a single way of looking at the world. As Vicky put it, “She had an uncanny gift with the interpretation of narratives, whether those of dreams, of the ancient, classical and Shakespearean worlds, or of those narratives we tell each other as we seek to make sense of our lives. As a teacher, colleague, advisor or friend she always seemed to hear more than you said, as if she could hear you thinking and hear your hopes and dreams speaking through you.” Students responded to that sensitivity, both to their personal needs and to the literary works they read together; and she mentored many of them as they navigated both difficult texts and difficult times in their lives.

Carol was especially concerned with students who were marginalized at Hamilton—students of color, gay students, and others who didn’t quite fit in to Hamilton’s culture, which was, at the time of the merger, less open than it is today. Before she arrived here, she was one of the Founders of the Madison Connecticut ABC program; in her early years at Kirkland, out of commitment to underserved students in the community, she moved outside her academic field of expertise to create Kirkland’s first course in African-American literature. Later on, at Hamilton, she created what was then called the “Program in English as a Second Language,” serving as its director for many years. Phyllis Breland remembers its origins: when Phyllis returned to the Hill to work in Opportunity Programs, Carol met with her and Chris Johnson to figure out a way to support the needs of bilingual students. The aim was to create, as Phyllis puts it, a “plan that could be supported by the institution, accessible for students, but without stereotype.” And she remembers Carol’s prescience at the time: “Her concern and insight was that this need would not go away, but grow.” And so it has. What was once an ESL program for students in the Opportunity Programs has developed into an ESOL program that serves the entire community, which has become increasingly diverse, increasingly international.

Besides literature and teaching, Carol’s great love was the outdoors. Janelle Schwartz, who was fortunate enough to be both her student and her colleague, puts it eloquently: “We shared the mountains as much as the classroom. We hiked up Baxter Mountain, just beyond and behind her house in the high peaks region of the Adirondacks. It was a sunny day, though cool. Nothing a quick hike up a mountain couldn’t warm up. We traveled doggedly, yet content, winding through fallen trees and other debris, after a recent rain storm had effectively obscured parts of the trail. Somehow this unexpected terrain was a comfort. Problem solving our way up helped us to gain our footing. Two private ladies talking of all things and nothing: our recent lunch, course design, favorite canoes, phenomenal falls while skiing, departmental meetings, the passing bug or bird call or vista. Professor and student. Colleague to colleague. Together, we talked of autonomy. The irony didn’t go unnoticed.

“It was autonomy, in fact, that Carol had repeated to me over and again whenever I asked her advice about teaching. She taught me Shakespeare and Dante; the art of translation and the complexity of dreams. She also taught me how to teach. But she never gave advice. In fact, she flatly refused any such direct assistance. Autonomy was her mantra, and I have made it mine.

“Think for yourself. Live for yourself. Learn of yourself. And do so selflessly. I miss her deeply, though I find her often with me out on the trail and in a good book.”

To return to my opening: Carol was, to the end, a private person; I would guess that, when she was here, there were many faculty at Hamilton who barely knew her. But all those who did know her benefited greatly from the contact. To close with the words of Vicky Vernon, “Her students and advisees, her colleagues, relatives and friends knew her as a strong and inspiring presence in their lives. That presence is still with us and will continue to be with us in memories and dreams.”