Presented: May 5, 2009, by Robert Simon, professor of philosophy 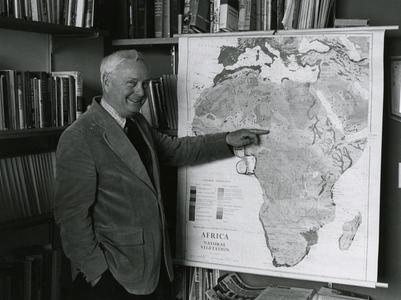 Channing Bullfich Richardson, a member of the Hamilton faculty in the Department of Government for over 30 years and Hamilton’s first professor of international relations, passed away on March 22, 2009, in Kennett Square, Pa.

Channing was born in October of 1917 in Cambridge, Mass., but was raised in Evanston, Ill., as his family moved. He earned his undergraduate degree at Amherst College, studied law and government at Harvard and received his Ph.D. from Columbia in 1950. He was a member of our faculty from 1952 until his retirement in 1983. While at the College, he served as chair of the Government Department and was a tireless advocate for internationalism in our curriculum, particularly in areas involved in studying the societies and politics of Africa. Channing was regarded as one of the College’s best teachers and was known for his devotion to his students and to the College itself.

Perhaps it was the range of Channing’s interests, values and experiences outside of academia that particularly enriched his teaching and scholarship. A committed Quaker and pacifist, he built a career that was one of service on the world stage as well as to his students and colleagues. During World War II, he was called early to serve and applied for and received status as a conscientious objector. He served in various public service camps. Following the war, he joined the United Nations Relief and Rehabilitation Agency and ran displaced persons camps that provided aid to, among others, Jews, Ukrainians, Poles and Russians in Germany. His involvement in international affairs continued throughout his career and included, among many other activities, administering Palestinian camps in Gaza in the late 1940s and early ’50s. He also studied in what is now Zimbabwe on a Ford Foundation Grant in 1957, lectured in Kenya in 1964 on international law and politics for the U.S. Agency for International Development. He also spent the summer of 1968 in Nigeria working on refugee problems for the American Friends Service Committee during the Biafran War.

Channing was an active outdoorsman and enjoyed hiking, skiing and squash, and was a skilled tennis player. In fact he met his wife Comfort while climbing Mount Katahdin in Maine. They were married in 1948, and Comfort also became a tremendous asset to our community and was the first coach of women’s sports on the Hill while at Kirkland College. While living in Clinton, Channing and Comfort were heavily involved in community affairs and were active participants in the Quaker Mohawk Valley Meeting.

Although Channing was a deeply committed pacifist, he was not above recognizing conflicts with other values he also held dear. He was an avid gardener and one evening, as he and Comfort were hosting a party in their yard, everyone noticed several deer approaching his beloved garden. Without missing a beat, Channing reportedly turned to his guests and vehemently exclaimed that if he had a gun, those deer would be in real trouble!

I myself remember Channing not only for his concern for students and for the victims of international crises but also for the many kindnesses he showed to new young faculty members on the Hill, as he and Comfort repeatedly went out of their way to make newcomers feel at home in their new surroundings.

Channing is survived by his wife Comfort, four children, their wives and partners, and three grandchildren. He was a good friend and a valued colleague and will be greatly missed not only by his students and colleagues on the faculty but also by all of those to whom he showed concern and kindness throughout his life.