Charles Augustus Godcharles was born on 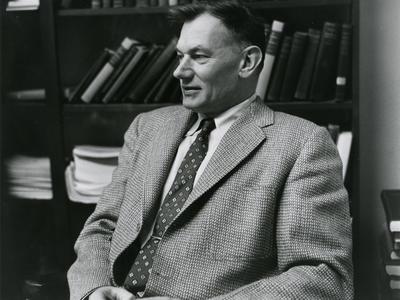 At Hamilton, Charlie’s best strength as a teacher came from his belief that students learn psychology best by becoming actively involved in laboratory work. This approach was most clearly evident in the department’s introductory course, Principles in Psychology, consisting of weekly laboratory in addition to the traditional lectures. The laboratory work ranged from experiments in which the student learned principles of conditioning by observing the behavior of his own laboratory animal in a Skinner box to those in which the subtleties of memory were examined as he and his fellow students learned lists of verbal material presented sequentially on a memory drum. Fundamentally the approach was to present psychology as an experimental science, one in which observation and measurement form the basis for discovering the lawfulness of behavior. Under Charlie’s careful guidance as chairman from 1951 to 1970, the experimental laboratory approach to psychology was eventually extended to nearly every course in the department. Charlie worked hard to secure funding from the National Science Foundation to provide each laboratory with the needed equipment for conducting the basic experiments in areas such as conditioning, perception, human memory and social behavior. The excitement generated in studies was highly gratifying to Charlie and the other members of the department. It was not unusual in those days to find students working independently on various laboratory projects at all hours of the day and night, even during vacations. Many of Charlie’s students who graduated from Hamilton have become prominent psychologists. Whether his students are working today as psychologists or are in other fields, they will remember him, as will members of this faculty who knew him, as a devoted teacher with a vision about the beauty of psychology as an experimental science presented to students in the context of the liberating arts.

Over forty years ago, Charlie Godcharles laid the cornerstone of a program that eventually was to become recognized as one of the country’s best small college undergraduate programs in psychology. In 1982, we recognized his enduring contributions to our Psychology Department by naming a seminar room in the Science Building the “Godcharles” room. Today we again recognize Charlie’s accomplishments and honor his memory with this minute to become a permanent record of the meeting.