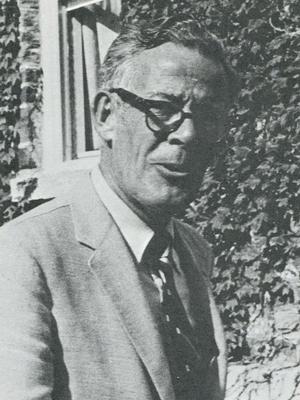 in Dunkirk, N.Y., on December 9, 1911. In due season, he matriculated at Hamilton and graduated in 1933 having concentrated in English literature. Twenty-seven years later, he returned to his alma mater as Upson Professor of Rhetoric.

The route from graduation to appointment, however, was hardly a well-traveled one. It started in the usual way: a master’s degree in English literature from Columbia and then three years of work on a Ph.D. at CCNY while also teaching speech at that institution. One night, however, Lafe, according to his own admission, got a little drunk with a friend and suddenly decided, in the midst of that hilarity, to return to Dunkirk to found a weekly newspaper. Graduate education ceased and editorial work began. After a year the paper failed and Lafe, instead of returning to CCNY, took a position with the Farm Security Administration, work that led him to the San Joaquin Valley in California and the Okies who had fled there because of the dustbowl.

Shortly before Steinbeck produced The Grapes of Wrath, Lafe wrote a piece titled “Trampling Out the Vintage,” also about Okie culture. His work with the Okies became strangely literary, for he soon recognized in Okie songs strong reminiscences of the Elizabethan ballads he had studied at Hamilton. With the encouragement of Alan Lomax, he taped some 500 Okie “ballits.” Eleanor Roosevelt visited the Okie community and became so intrigued by Todd’s work that he was invited to share some of his experiences and recordings at the White House. The collection itself was sent to the Library of Congress where it was mined by Burl Ives, Joan Baez and, of course, Lomax himself. Portions of it have recently been released on National Public Radio.

War came, and Lafe was drafted into the Army where he became a lieutenant and served as a public relations officer in the New York Port of Embarkation. After the war, he acted as publicity director for an agency rebuilding war-torn France. In 1950, he joined the State Department and then was transferred to the Office of Private Cooperation. Finally, in 1957, he founded an international public relations firm that had among its clients Pan American Airways.

He was heading that agency when he was invited to speak at Hamilton in 1959. Two weeks after his lecture and much to his surprise, President Robert Ward McEwen arrived at his doorstep to offer him the position of Upson Professor of Rhetoric. In a decision that radically redirected his whole life, he accepted the offer and began a new career at Hamilton in 1960. Lafe’s predecessor in the department was none other than Willard B. (commonly called Swampy) Marsh, an instructor in elocution of the decidedly old school. Marsh prepared orators for platform addresses and concentrated upon stage presence, gesture and turn of phrase. Professor Todd was not interested in such matters. His classes emphasized how to communicate and convince in the real world of the corporate boardroom as well as on the soapbox of social protest. In so teaching, he brought Hamilton public speaking firmly into the 20th century.

Lafe never pretended to be a great scholar, but he did co-author two books: one on Alexander Bryan Johnson, a Utica banker of the 19th century who wrote extensively about the philosophy of language, economic theory and religion; the other, with Professor Russell Blackwood, on Language and Value. He wrote articles and reviews for The New York Times Magazine, The Saturday Review and other periodicals. He also produced an autobiography titled, Sittin’ Stone: Memories of a Chautauqua County Boyhood. And, oh yes, he was responsible for bringing to teach at the College Alex Haley, the author of Roots.

As a colleague, Lafe was genial, hardworking and very much involved with College life. He was also, in his free time, an ardent fisherman and member of the Adirondack League. His son Evan graduated from Hamilton in 1955; his granddaughter Clare Powell in 1982. Lafe retired in 1977 and, with his wife Claire, moved to Vero Beach, Florida, where he died on August 2, 2004. All who knew him will miss his wonderfully mellifluous voice, his pleasantly collegial nature and his broad humanitarian view of life.