Presented: May 4, 1999, by Jay Williams, professor of religious studies 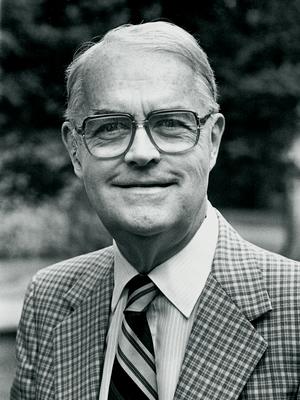 David Maldwyn Ellis was born in Utica, N.Y., on October 14, 1914, the son of Margaret and Samuel Ellis. His father was a Utica grocer who won prizes for his essays, short stories and poetry. David, in his later years, loved to identify himself as “The Son of Sam.” His grandfather was a Welsh stonemason who actually cut and laid many of the stones for Hamilton buildings. David never forgot that sturdy Welsh heritage; he was sober, kindly and hard-working.

David Ellis was educated in Utica schools and then matriculated at Hamilton, graduating Phi Beta Kappa, with many prize awards, in 1938. After four more years of study he received his Ph.D. from Cornell University in 1942 and then began teaching, first at the University of Vermont and then at Cornell. After a post-graduate fellowship for further study at the University of Michigan he was appointed to the Hamilton faculty in 1946.

David was a man devoted to scholarship. A social and economic historian who focused upon the development of his own state, he wrote prolifically about canals, railroads, immigration, battles, religion and ethnic history. His first book, Landlords and Farmers in the Hudson-Mohawk Region (1946), won the Dunning Prize of the American Historical Association. Subsequently, he produced nine more books about New York State as well as numerous articles, encyclopedia entries, edited volumes, forwards and book reviews. With 75 items to his credit in the library catalogue, it may very well be that he was the most published Hamilton faculty member of the 20th century. It is noteworthy that after retirement in 1980 he continued to publish both articles and books, his last work coming in 1994.

David Ellis was not very interested in theories of, or the philosophy of, history. He paid little attention to psycho-history or deconstruction. His emphasis was upon the accumulation, examination and interpretation of facts. Those who took his course could expect plenty of names and dates, plenty of details. These details, spooled out to the class in a way that gave him the nickname “Spooly,” were always offered with a broad and humane perspective and with many a humorous aside. David loved puns and could be counted on for a “groaner” at opportune moments. Throughout his career, he devoted himself to his teaching and for that was rewarded by many enthusiastic students who followed his footsteps into the study and teaching of history.

As a faculty member, David Ellis was imperturbably loyal to the College. From 1968 until 1978 he served as chair of the History Department with great distinction. A friend and counselor for several Hamilton presidents, he seldom took the revolutionary side but held staunchly to the middle ground. Invariably, he argued for what he deemed best, not for himself or for his department, but for the College.

David Ellis was a religious man who devoted himself to his church, Moriah Presbyterian in Utica, serving as both an elder and clerk of session for many years. He had a fine tenor voice and loved to sing both in his church choir and in the Oratorio Society. He was also a fervent Hamilton ice hockey fan and could be counted on to attend every home game, though he often asked, in his whimsical way, “Do you think this is a Christian sport?”

David is survived by his wife Carol, his sisters Margaret and Sarah, and by a number of nieces and nephews, several of whom attended Hamilton. With his passing Hamilton loses not only a distinguished professor emeritus but one of the alma mater’s staunchest supporters and loyal friends. He will be greatly missed by all who knew him.