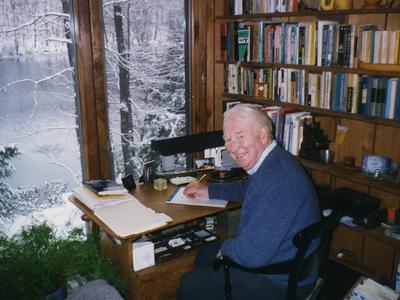 David J. Gray, professor emeritus of sociology, died on Saturday, May 11, at his home in Hop Bottom, Pa. He came to Kirkland College in 1969 and chaired the Sociology Department at Hamilton until his retirement in 1994.

David was a man of simple decency. His life as a scholar, teacher and academic politician were shadows on the wall, appearances of a deeper character that commanded respect and admiration from colleagues and students. In his personal relations, he was congenial and a master storyteller. His stories were a way into The Subject, and the subject was always how to live within oneself, to ask how a decent department would act, what a decent college might do. When I say David lived within himself, I mean he had a personal code of conduct, consciously created and maintained. He was unpretentious, his talk unembellished. He was a good listener and always asked the right question. A colleague and friend paid David a high compliment when he said that David could “cut through the crap.” In an intellectual community, where there is an irresistible tendency to overproduce opinions about everyone and everything, he was nonjudgmental. In the 15 years I knew David well, he never gossiped about colleagues and always, always treated them with respect.

It is not surprising that David loved the role of faculty advocate. He was a consummate academic politician, having apprenticed for the craft, he said, as “a boy from Scranton” amidst his southern colleagues at William and Mary. Whenever asked about this metamorphosis, he adverted to one of many stories or a favorite political quip. The story I liked best was told in a Pennsylvania drawl about the southern politician who, when asked before a hostile audience of constituents about his stand on moonshine, began, “If you mean that vile poison distilled by the devil, that witch’s potion that turns youth and vigor to age and despondency (and so on), then I’mmm a’gin it.” And the story would end, “But if you mean that sweet elixir that rolls off the tongue and flows like honey through the veins, warming the spirit of young manhood and putting a glow on the cheeks of old age (and so on), well then I’mmm fer it.” His favorite quip about academic politics was one made by Henry Kissinger. When asked as secretary of state why academic politics was so vicious, Kissinger replied, “Because the stakes are so small.” What I admired most about my friend was his ability to keep a sense of proportion, not only in many issues before the faculty, but in his life as a whole.

In many ways, David was the ideal teacher at a liberal arts college. His passion for sociology came not from the statistical methodologists, systems analysts and social engineers, but from its seminal thinkers such as Marx, Weber and Durkheim, all of whom were framers of the big questions about self in society, the historical discontinuity of modernity and social justice in an industrial order. He taught students to think about what it meant to live in a society in which there was individual freedom commensurate with social order, industrial growth without increasing inequality and individualism in mass culture. David had no use for the value-free sociology that was all the rage when he entered the academy. He preferred instead the sociological imagination of C. Wright Mills, whose methods incorporated relationships among biography, history and social structure as the way to do good social analysis. Students who took David’s classes read the seminal thinkers of sociology, but they also read Plato, George Orwell, Sir Thomas More, Bettelheim, Freud even Bud Schulberg, each chosen to raise a simple moral challenge to live a life examined. He always ended one course by walking into class, turning on the tape recorder, and walking out. Students heard Martin Luther King’s “I Have a Dream” speech. He believed that all the important problems of society were, in the final analysis, moral dilemmas that required personal codes of decency, which included social responsibility.

His scholarly corpus is consistent with this portrait of him as a teacher. He wrote more in the style of a social essayist than as a specialist in control of a literature. He commented on issues of the day and was reflective about the direction of his own discipline in American society. He criticized a value-free or objective science of society that would fill the pockets of its colleagues with grant money but produce nothing of any lasting value. He once had the opportunity to debate Milton Friedman on the subject of the morality of the market and argued against the narrowing of liberty to economic liberalism, and liberalism to rational self-interest. And he wrote about his own generation after World War II, which was concerned with the problems of conformity in a mass society.

David was a private person. In his leisure away from work he lived at Loomis Lake, close to Scranton, where he was born. David was rooted in the ethnic ecology of a coal-mining valley of northeastern Pennsylvania. Etched in that scarred landscape is the history of Welsh miners and his own biography of a family who came to America from south Wales. A source of strength for David was his lifelong friendship with Scranton classmates who, in a generation which practiced a gentle violence toward ethnic others, considered their Welshness, Jewishness, and Irishness a rich source of humor and lore that enriched their daily lives. To be sure, Scranton had ethnic neighborhoods and jobs protected by ethnic origin, but there was accommodation and intermarriage. At a mature stage of his life, he married Christine, whom he referred to as “a good Catholic girl.” His old friends said that she was the prettiest girl in the class. These last years he had begun to reflect on Welshness and to write about identity and prejudice in Scranton, tracing changes in personal and collective identity that happened in the voyage from Wales to America.

We need not mourn David. His was a life well lived, and to his many friends he often said how grateful he was to Hamilton for paying him to do what he would have done anyway. Characteristically, he graded his own life as a B+ and hoped that when he died, people would say he had done a little good while he was here.

Thank you for listening.