Presented: May 7, 1985, by Donald Potter, professor of geology 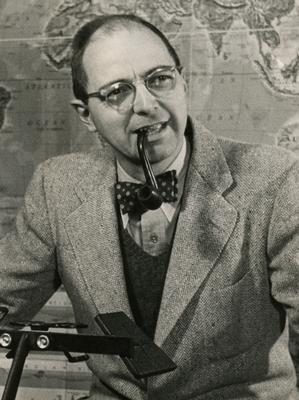 e preferred it, was born September 24, 1914; he died March 21, 1985. Following undergraduate work at the University of Vermont and a master’s degree at Cornell in 1937, he worked for two years as a petroleum geologist for the Texaco Company in Louisiana, a job which was to strongly color his views of the whole field of geology, the petroleum industry and especially the important role of large, well-managed companies. Dave was a staunch supporter of free enterprise. and one had only to engage him in casual conversation to know of his distaste for governmental controls of any kind.

His doctoral work was done at Columbia under Marshall Kay, and following this he taught at Holyoke from 1948 until 1952. He came to Hamilton in 1954 and was chairman of the Geology Department from that time until 1978, retiring in 1980.

David Hawley’s research was a continuing inquiry into the environment of deposition of turbidities and related sedimentary rocks. His Ph.D. thesis, published in the 1957 Bulletin of the Geological Society of America, was one of the early papers to document the widespread submarine effect of the Taconic orogeny. Later he continued this interest in a study of the La Hood Formation, southwestern Montana. At the time of his death he had just completed an article for the forthcoming GSA Centennial Field Guide for the Rocky Mountain section. These studies and his long time association with the Indiana University Summer Field Station at Cardwell, Mont., were major ingredients in his professional life.

As a classroom teacher, Dave was a strong advocate for precise use of the English language and for clarity of presentation. He had no peer when it came to the proper use of visual aids. He had an unusually strong memory for facts and details, and these poured from him in lectures and in casual conversation. Though he had little regard for Hamilton’s system of teaching evaluation, in the long run he was regarded by many of his students as a strong and effective instructor.

It was clear to all of us who knew him that Dave was a person of certain strong principles and persuasions. When he took on a cause and was its advocate, generally that cause won. One of the most notable examples involved Moss Island at Little Falls where there is important evidence for the evolution of glacial lakes in the Mohawk Valley. The plan put forth by the Department of Transportation and the Little Falls City Council called for paving the island with concrete supports for a four-lane highway, which was to pass over the island. Joined by Dr. Karl Gruppe of Utica, Dave spearheaded a drive to have the highway built elsewhere. Their work entailed not just a few of Dave’s famous letters, and it involved intense discussion at numerous meetings. In the end, nature’s friends won and the highway was rerouted.

His colleagues in geology will remember David Hawley as a person who dealt with fairness and honesty, as one who liked people and remembered their names, and as one who derived immense satisfaction and pride from his children, both of whom are professional geologists.

His close friends remember his keen appreciation of classical music and many happy hours on the mountain trails skiing and hiking, swapping insults and very bad puns. The Hamilton faculty has lost a strong character and one whose influence upon former students will be long-lived.