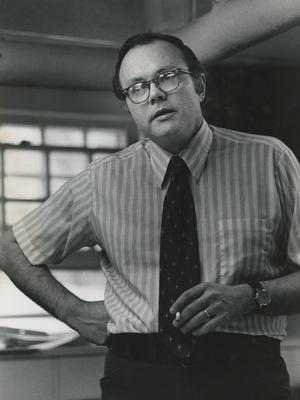 n College History Department as an instructor in 1963 and retired as professor of history in 1991. He rendered 28 years of valued service as teacher and colleague.

David received the A.B. and M.A. degrees from George Washington University and his Ph.D. from Cornell University in 1967. He was a veteran of the United States Air Force. He taught for one year at Western Illinois University before coming to Hamilton and later held visiting appointments at SUNY Albany and the University of Washington, but his career was truly devoted to Hamilton College. His scholarly interests lay in American colonial history, and especially in diplomatic history, but he was a versatile teacher who was always willing to stretch to teach what the College or department needed.

David was a teacher in the most complete sense of the word. He offered a variety of courses that generations of students found stimulating and rewarding, but a recitation of his courses, degrees or formal activities does not capture the man he was. He always had time for the individual student. He never simply gave an F, but handed the paper back to the student and said, “Rewrite it and let me help.” He served for many years as a faculty advisor and as a key member of the pre-law committee, and would spend hours with a single student in an effort to pick the best law school for that person. His door was always open to students or colleagues, and all could expect a smile, a gentle greeting, a friendly ear, a funny story about Norwegians in Wisconsin, and, if the season were right, a jar of pickles and a few spare zucchini.

David served, at one time or another, on practically every committee at the College and chaired the History Department. He was also active in several professional organizations and served a term as president of the New York American Studies Association. He was also a frequent and popular speaker in the community and was especially active during the bicentennial celebrations of the mid-1970s. He produced a local television show about the history of Central New York and toured West Germany to lecture on the bicentennial. David was a devout Lutheran and served his church at the local, regional and national levels.

David’s last years were absorbed by a tragic illness which stole much of his creativity and strength, but never his warmth or caring. He always had time to congratulate a colleague on a new achievement or to encourage a child toward his hobby of stamp-collecting.

David died on September 9, 1993. He is survived by his wife Mary Lou, his parents of Menomonie, Wis., three sons (Robert ’78, Bruce and James ’90) and three beloved grandsons. When we remember him, we shall dwell on his years of fine teaching, his loyalty and service to the College and community, and the uncommon honesty and courage with which he and his family faced the ordeal of his final years.