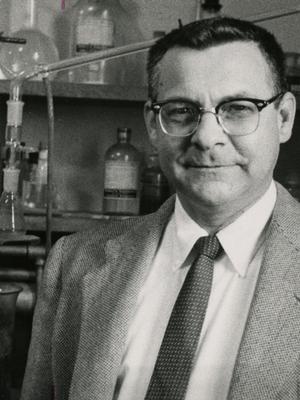 his early years in a suburb to the south of Philadelphia. After high school he spent several years in various jobs and then was inducted into the Army, where he served from 1943 to 1946. His active duty was spent in Italy, where he was part of an artillery ranging group. Following the war he enrolled in the University of Pennsylvania, and, upon his graduation with a B.S. in 1950, he was persuaded to attend graduate school at Brown by the chairman of the Penn chemistry department. Don was awarded the Ph.D. in 1954 after completing his thesis under the direction of Professor Robert H. Cole. A year in the photoproducts laboratory at the Dupont Company convinced him that an industrial career was not for him, and, after two years of doing postdoctoral work back at Brown, he joined the Hamilton faculty in 1957. His rise through the ranks was rapid; in 1961 he became associate professor and was named full professor in 1968. Don served as department chairman from 1971 to 1980, and, for the five years preceding his retirement in 1986, he was the Childs Professor of Chemistry.

Donald Denney was the exemplar of the practicing teacher-scholar. He was well-read (and a very careful reader), thorough and scrupulously honest. His scientific work, which probes the structure of liquids and solutions by examining their dielectric properties, addresses an important and fascinating problem, and Don authored or coauthored nine scientific papers on the subject. His collaborators, who include Professor James Ring and numerous students, grew to admire Don’s ability to visualize the physical reality of the liquids and to translate that vision into knowledge about their behavior. Aided by grants from the Research Corporation and the National Science Foundation, much of the research was carried out during the summers, when Don became affectionately known as “The Kindly Old Investigator.” The more relaxed atmosphere during the summer also permitted students and colleagues to see another side of Don’s abilities; he was a devastatingly nimble shortstop on the winning faculty softball team.

His teaching benefitted from the same personal characteristics as did his research. He was highly organized and original in his approach to the teaching of physical chemistry, both in the classroom and the laboratory. The experiments he put in place, the problem sets he designed and the manner in which he presented this complex subject serve as a model of the right blend of erudition and simplicity. Those who passed through his course universally responded by saying, “I learned SO much.” Upon his retirement in 1986 his friends and former students, remembering the ease and skill with which his superbly crafted lectures conveyed the complexities of physical chemistry, established the Donald J. Denney Prize for a student who excels in that subject.

His service on faculty committees, particularly CAP, was legendary. He kept records of everything, and, years later, even current chairs or deans could consult Don on something that the CAP had, or had not, done. Don’s mastery of detail ensured that noting would be overlooked. He also served with distinction on several search committees.

In 1956, he married Carolyn Anderson at Cranston, R.I.; she predeceased him in 1983. Donald J. Denney died in Winooski, Vt., on April 14 of this year. He is survived by his three children, Martha, Michael and Matthew, all Hamilton graduates.