Presented: May 7, 1985, by Russell Blackwood, professor of philosophy 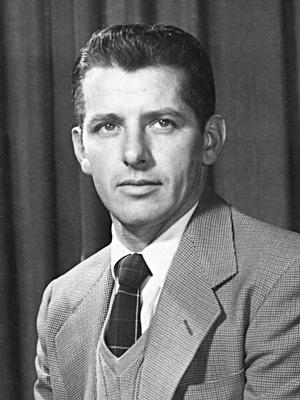 education and head coach, football and golf, died suddenly on Jan. 11, 1985, at the age of 65. A graduate of Rutgers University in 1943, he entered the United States Navy and served in the Pacific War as a naval bombardier. For this service he was awarded the Distinguished Flying Cross and the Air Medal with Oak Leaf Clusters. Returned from the war, Don went back to Rutgers to earn a master’s degree in education in 1948.

While an undergraduate at Rutgers he won varsity letters in football, basketball and track. In 1942 he was given honorable mention as All-American halfback. After his return to Rutgers in 1946, he coached, in successive years, the junior varsity football team, the 150-pound football team and the freshman team. The last he led to the first undefeated and untied season in the university’s history.

Donald Jones came to Hamilton College in April 1949 as associate professor of physical education. His duties at that time included teaching squash, tennis and golf for 22 class hours a week, coaching the golf team and the junior varsity basketball team – all this in addition to being head coach of the football team. The assignment was staggering, but Don’s resources were indefatigable. He was a coach who wanted to win, but he knew more clearly than most the place of winning in the wider scheme of things. “You must remember,” he would often say, “that football is just a game played by young men to while away a Saturday afternoon.” “If you’re worried about tomorrow’s exam,” he would tell his football players, “don’t come out for practice this afternoon, but hit the books instead.” In a golf match with a young colleague to whom he had taught the game, he would sometimes says, “Let’s forget that you ever made that awful slice and take your turn again.” Don Jones was not only generous and gentle, but he was a gentleman. It is for these qualities that he is remembered by his colleagues and the many alumni of this college.

Donald Jones resigned from Hamilton College in 1980, moving to Florida where he soon became football coach and athletic director at St. Andrew’s School. That school’s 1984 football season was the best in its history. The headmaster said of Don, “He took over the football program and put together a winner with the same kids who were playing before. He had no better talent to work with, but he had the understanding that was needed. He was like a father to them; he had great sensitivity.”

Donald Jones leaves his wife Cathy and three sons, Terry, Tim and Michael – to whom we extend our profound sympathy.