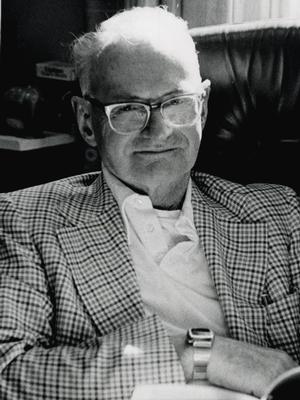 Dwight Newton Lindley was born on the Fourth of July 1920, in Montclair, N.J. He attended Deerfield Academy, graduating in 1938, and matriculated at Hamilton College in the same year.

Dwight majored in English; his mentor was George Nesbitt, from whom Dwight said he learned all he knew about teaching. In recognition of his high academic standing, Dwight was the first member of the junior class to be granted permission to bring a car to campus. Graduating Phi Beta Kappa in May 1942, Dwight emerged from Hamilton into a country at war and, like almost all his classmates, enlisted in the armed forces.

By the end of World War II, he had risen to the rank of master sergeant in the Corps of Engineers. In the Army he came for the first time to know men without formal education. Growing up in Montclair and educated at Deerfield and Hamilton, he had always unconsciously assumed he was intellectually superior to uneducated people. Now he was impressed to discover that many of them were more intelligent than he.

During the war he met and married Janie E. Morrison, originally of Corinth, Miss., who was a staff sergeant in the Marines at the time of their marriage. Dwight and Janie had three children, David, Marguerite (known as Peggy) and Ann.

After the war, Dwight began graduate study at Columbia University, from which he received a master’s degree in 1947 and a Ph.D. in 1958. At Columbia, he found that the Latin he had studied at Hamilton was still good enough to enable him to tutor his fellow graduate students. Dwight taught for two years at Bowdoin College before accepting a position at Hamilton, where he remained from 1952 to 1986. He held the chair of the Department of English from 1968 to 1974, and served as acting dean of the College in 1974-75.

When he joined the department, his respected teacher George Nesbitt was still teaching Romantic and Victorian literature. Though Dwight’s graduate specialty had been in 19th-century literature, he trained himself as a medievalist. Until Professor Nesbitt retired, Dwight taught freshman English, Old English and a seminar in expository writing.

Dwight had high standards both as a teacher and as a colleague, and he could be acerbic when his standards were not met. Like George Orwell, one of his heroes, he regarded sloppy thinking and writing as related moral failings. But he distinguished between laziness or indifference on the one hand and an honest lack of ability on the other. Once a colleague in another department told me a young relative of his was coming to Hamilton. Saying that the young man had some difficulty in learning and would require extra attention, he asked me to identify a member of my department who would be patient and understanding with him. Having observed Dwight working with students, I suggested him. My colleague was astonished. “You shouldn’t judge Dwight’s manner with his students from his behavior to his colleagues,” I said. “He expects more from us.”

As he grew older, his sardonic manner mellowed somewhat. As Fred Wagner remarked of him, “His snarl became almost a purr.” Dwight was chair of the English Department when I joined it in 1972. To me he seemed an ideal department chair. He always volunteered to take on difficult or unpleasant duties but always gave others the option of taking on an assignment. “If nobody objects, I’ll take care of this myself,” he often said in a department meeting.

The most significant scholarly accomplishment of Dwight Lindley’s career was the edition of the later letters of John Stuart Mill, on which he collaborated with Francis Mineka of Cornell University. When this four-volume edition was published in 1973, a reviewer in TLS wrote, “All future discoveries will simply be pendants to be added to the great definitive work we now have.” Dwight also published articles on Mill and on Victorian historical novels, and he was editor of Adventures in English Literature, a high school textbook.

But Dwight was foremost a teacher, especially a teacher of expository writing. One of his values was succinctness. Early in my first year at Hamilton, I showed him a page-long assignment I had made for an in-class essay, in which I enumerated for my students all the questions I hoped they would consider before writing. “Don’t write ‘em a book, John,” he said.

Dwight was predeceased by Janie, his wife of 56 years. He is survived by his son David, by his daughters Peggy and Ann, and by seven grandchildren. He died on July 18, 2007, in a hospital in Norwood, Mass.

Outspoken and with a satirical sense of humor, Dwight was also thoughtful, wise and, under a crusty exterior, kind. Like the Victorian figures he admired, he had a strong sense of duty and of responsibility for others. He loved Hamilton College and worked to help the College and its students achieve all they were capable of. He believed in the power of good writing to civilize people and change events, and he promoted sound thinking and good writing in every way he could.