Presented: May 3, 1983, by David Ellis, professor of history

Edgar Baldwin Graves, one of the most admired and 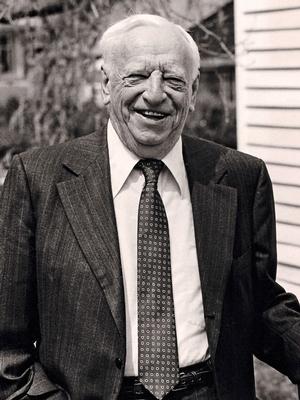 respected teachers in the history of Hamilton College, died on March 24, 1983, at the age of 84. Fondly known to generations of students as “Digger,” he was an exemplary teacher, scholar, colleague and devotee of sports. Who can forget his unassisted triple play in the faculty-student softball game at age 60?

A native of Philadelphia, Digger attended Haverford and subsequently earned his doctorate at Harvard University. In 1927, he came to Hamilton, where he taught for 42 years before retiring in 1969. He acted as chairman of the History Department for decades, and during World War II he served as dean of faculty.

As a scholar, Digger followed his mentor, William Lunt, in investigating the intricate relations between English ecclesiastical courts and the papacy during the Middle Ages. However, his most important undertaking was the monumental Bibliography of English History to 1485, published in 1975 by the Clarendon Press of Oxford. His contributions were recognized by his peers when he was elected a councillor of the Medieval Academy of America and a fellow of the Royal Historical Society. Haverford and Hamilton College awarded him honorary degrees.

However impressive his scholarship, Digger was preeminently the teacher. A demanding pedagogue, the stocky figure in the seersucker jacket, usually covered with chalk dust, commanded the attention of generations of students as he explained everything from land tenure rights to the intricacies of the game of cricket. Mr. Graves once said that every teacher taught his character as well as his subject. That truth was perceived by thousands of undergraduates on this Hill who saw in Digger not only a master teacher, but a man of unsurpassed humanity and integrity.