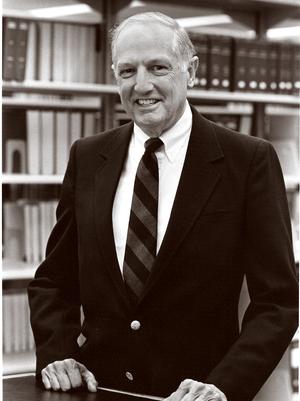 Presented: Sept. 3, 2019, by Alfred Kelly, the Edgar B. Graves Professor of History Emeritus

Edwin Borden Lee, Jr., the Marjorie and Robert W. McEwen Professor of History Emeritus, died on June 14, 2019, in Durham, N.C. He was 95 and had been retired for over 30 years. A native of Goldsboro, N.C., Ed was a graduate of Duke University, where during World War II he joined the Naval ROTC. Upon his graduation, the Navy sent him to Japanese Language School. After the war he worked as a civilian employee of the American Army Occupation Forces in Japan. Returning to the States, he enrolled in the history graduate program at Columbia University. Called up again during the Korean War, he spent more time in East Asia. He retired from the Navy as a lieutenant in 1955 and received his Ph.D. in 1960, two years after Hamilton had hired him to teach a wide variety of Asian history courses.

Looking back on his career, Ed modestly observed, “I’m not a compulsive scholar. My joy was teaching, and Hamilton emphasizes teaching.” Maybe not compulsive — Ed never published the big book — but he produced a few scholarly articles, kept up in his specialty of Tokugawa Japan, read widely, and received recognition in his field as both a Rockefeller and a Fulbright scholar.

But a teacher he was indeed. The students had nicknames for many of their professors in those days. “Asian Ed,” as he was affectionately known, gave calm, beautifully organized, meaty lectures, often sprinkled with erudite anecdotes; and he ran probing class discussions with no place for unprepared students to hide. Outside of class he would do most anything for students, mentoring them endlessly, but never babying them. He dispensed avuncular advice, helped them through personal crises, drove them to the airport, even let them stay at his house for extended periods. The students loved and respected him, and he clearly enjoyed his influence on them. Countless former students kept up with him for decades after graduation.

Whenever Ed’s name was mentioned, the first words that anyone thought of were “courtly” and “gentleman.” And he definitely was a courtly gentleman of the old school, and also, what used to be called a “confirmed bachelor.” He built his life not just around teaching, but also College service. He served on every conceivable committee and gracefully led that collection of stubborn cranks known as the History Department. The secretaries — usually the best judge of a professor’s character — thought the world of him and lamented his retirement as the end of an era. But this sweet gentleman sometimes had an acid tongue. If he trusted you, he’d tell you his private opinion not just of colleagues (for example, who was unelectable to even the lowliest committee), but of whole departments, and especially of the administration. Let’s just say that his view of the last was … gently negative. With his loyalty and love for the College, he earned the right to be critical.

One of Ed’s most famous traits was thrift. I remember him once scolding us for ordering room-service coffee and cookies on the College’s dime after an exhausting day of convention job interviewing. He huffed and he puffed, but then with a hint of a smile, he helped himself generously — of course only to avoid waste.

I can’t think of anyone who had more common sense and fundamental human decency than Ed Lee. If he thought something was a bad idea — whether the latest paperwork from the dean’s office or acquiring more books after age 50 — it probably was a bad idea. If he thought that a dean or a president was a good person but in the wrong job, he was probably right.

Ed leaves, I think, two legacies for Hamilton. First, he was a pioneer in making the College more cosmopolitan, in reminding his colleagues that the curriculum needed to expand beyond the traditional areas of North America and Europe. And second, although he would have pooh-poohed as unctuous and fatuous our phrase “the Hamilton family,” his career actually epitomized it. Ed would have appreciated the irony. He was a fine mentor for students and faculty alike, and he embodied many of the virtues that we like to brag about.