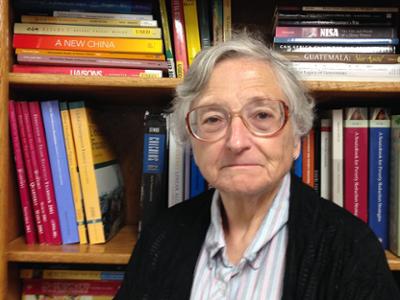 Presented on May 5, 2020, by Shoshana Keller, professor of history

Esther Sue Kanipe earned her Ph.D. in history from the University of Wisconsin, joining the History Department at Hamilton in 1976, where she became one of the first women granted tenure. Her teaching and research interests included modern French history, the history of women and the family, and disability studies.

Esther was honest and direct. She knew who she was and what she valued and acted accordingly. As [Edgar B. Graves Professor of History Emeritus] Alfred Kelly puts it: “Esther was a person of amazing moral fiber, I guess you might say, with a wonderful sense of perspective, empathy, and humility. Though she had serious health problems going back decades, I never heard her complain or make excuses. Instead, she helped many others, including her handicapped brother for years.”

Esther took pride in her humble origins and always worked hard, inspiring others to work for good. She was a colleague who could be counted upon when needed. Name a committee. Esther was on it, did more than her share of the work for it, and most likely chaired it. Because Esther was both an accomplished and unassuming colleague, faculty at all ranks sought her counsel. She treated everyone with respect, and was open-minded, compassionate, and non-judgmental.

Esther was an exemplary mentor of faculty. She gave of herself, mentoring new faculty, especially women, in ways big and small. She would build us up when we needed it, but also was willing to offer a swift kick in the backside if it was called for. In the case of her department, she transformed history from a department of one woman to three before her retirement, and she championed the study of history outside the U.S. and Western Europe. Esther would be thrilled to see a woman as our dean and as chair of the faculty. She would revel in the new generation of faculty who joined the College since her retirement. She would be delighted to know that in the fall, Hamilton will have a historian of Africa on its faculty and that we have a History Department that is half women.

Esther worked tirelessly to support first generation college students and students of color, including those in both our HEOP and Posse programs. Esther served as Hamilton Boston Posse 6’s mentor from 2006 to 2011. Several of her Posse students recalled that they would not have made it through Hamilton without her: “I can still remember the first day I met Esther. She left me utterly confused because her sweet grandma exterior didn’t quite match the ​I don't take any foolishness ​words that tumbled out of her mouth when she introduced herself. I knew instantly she wouldn’t be like anyone I’d ever met before. And that she wasn’t. Esther was many things — loving, caring, tough, supportive — but above everything she was fair. Someone you could depend on for thoughtful advice when needed” (Siraad Dirshe ’10).

“Starting my college career knowing I had Esther’s unwavering support, mentorship, and much-needed guidance was critical to my success at Hamilton. Esther was there for me during one of my toughest semesters both emotionally and academically. She lovingly listened to me while I struggled to process and understand what I was going through, then she provided some much-needed tough love that ultimately helped me stay at Hamilton. I am so grateful to Esther for everything she did for our Posse and all the ways she made Hamilton feel like home for us and so many others” (Leide Cabral ’11).

As an educator, Esther possessed an unusual ability to explain complex ideas in clear language, something she shared with fellow southerner [Eugene M. Tobin Distinguished Professor of Sociology] Dan Chambliss, with whom she had an affinity. She will be remembered as one of the finest teachers of her generation; an educator who inspired her students to explore new subjects and to think independently. This is her greatest legacy as a professional.

Alfred Kelly remembers Esther “as a genuinely admirable person” whom we will all miss, adding that the question “What would Esther say or do in this situation?” should live on whenever anything important comes up. In the History Department, we can’t help but think of Esther as we have faced the challenges of supporting students and each other through the pandemic. In thoughts he wanted to share to pay tribute to his longtime colleague, Alfred speaks for the entire department, stating, “I always admired Esther’s ability to cut through the bullshit without being offensive about it, and to live and let live without holding a grudge.”

In recent years, Esther faced a challenging battle with pancreatic cancer with bravery, determination, and spirit. In other words, she carried on with her life in much the same way as she always did. Esther Kanipe passed away on Thursday, March 19, 2020, surrounded by her family. She is survived by her daughters, Soniya and Sandra Kanipe, and three grandsons whom she adored.