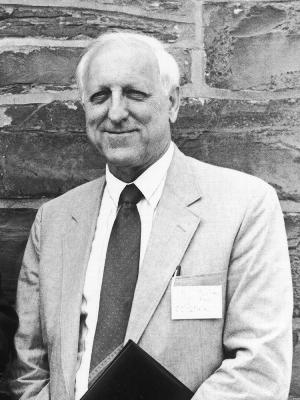 Professor Emeritus of Biology Eugene C. Putala died on April 1 at age 88. Gene received his bachelor’s and master’s degrees from the University of Massachusetts at Amherst and became a member of the U. Mass botany faculty afterward. Part way through his time there, Gene took a two-year leave to earn his Ph.D. in 1960 from the University of California at Berkeley.

Gene arrived on the Hill from the University of Massachusetts in 1968. He came as a charter member of the Kirkland College faculty and chair of the science division being intrigued by Kirkland’s educational approach. At the merger of the two colleges in 1978, Gene became a member of the Hamilton faculty and taught until his retirement in 1989. He also served as interim chair of biology during the 1983-84 academic year, a time of important transition for our department. Gene taught courses in botany and environmental biology and introduced what is now Hamilton’s introductory Environmental Studies course, Society and the Environment.

Gene was an exceedingly analytical and thoughtful colleague. Emeritus Professor William Rosenfeld, also a charter member of the Kirkland faculty, remembers Gene as one he would turn to “for measured perceptions in matters of policy as well as practice appropriate to our experimental setting.” Bill recalls that after an especially contentious meeting of the Kirkland faculty, “we asked Gene, “Didn’t you find Colleague X’s assertions a bit over-ripe?” [Gene] raised his distinguished chin and focused on a point in the middle distance above our heads. “I see what you mean.” Then he directed his gaze downward into ours. “But some among us may believe that, despite her tone, several of her arguments have merit.” Bill observed that “Gene obviously had listened intensely and dispassionately to all arguments. We learned to appreciate him as a person who valued accuracy over impression and integrity over contention.”

When I joined the Biology Department in 1979, Gene was a welcoming and generous mentor for me, and later for others, helping us to understand our department and this institution. He spent many an evening session filling me in on the histories of Hamilton and Kirkland and the ways of the newly merged institution. As was his nature, his comments and observations were clear, direct and more than likely couched in very salty terms.

On a different note, Gene was well known for the amazing disarray of his office and lab. The piles of papers were numerous, immense and mind-boggling. They appeared to cover just about every available bit of surface. While I have attempted to emulate his accomplishments on this front, I have not come close to meeting his standards. I doubt that few have. Ernest Williams likes to suggest that by Gene’s retirement the piles in his office and lab had reached a steady state or equilibrium. Whatever was added to the top was offset by the decomposition at the bottom — a true ecological balance had been attained.

Gene truly emulated the spirit of the liberal arts and lifelong learning. After retirement, he could be found frequently in the Science Building office duplicating articles of varying topics he found interesting and thought we would as well. Gene also continued to be a regular member of the audience in departmental seminars. Often the first with a question at the end of a talk, Gene showed a keen interest and perception in whatever topic had been presented. And, at senior project presentations, many a senior concentrator would ask who was the “old man” in the middle of the audience who was asking so many questions.

Not surprisingly, Gene was an avid gardener, and much of his retirement was spent in the magnificent gardens of his home. He and Patricia travelled widely to collect plants for their gardens. He was a member of the Root Glen Advisory Committee and a regular speaker at events sponsored by the Hamilton Arboretum. You could find him during Reunion Weekends providing tours and lecturing on the history of the Root Glen.

His contribution and legacy to the College can be found in the plantings on campus and in the first environmental studies course in the curriculum. Throughout his life he was thoughtful, caring and intellectually alive. Gene was a wonderful colleague.