Presented: May 1, 1990, by Donald Potter, professor of geology

Franklin Grant Hamlin was professor of French from 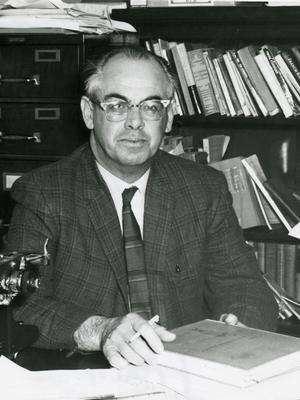 1948 until his retirement in 1980. He was born in Old Town, Maine, and raised in a proud family tradition of secondary school teaching. Educated at Bowdoin, Middlebury and the University of Paris, he taught in preparatory school for six years before coming to Hamilton. To talk with Frank was to immediately understand his roots, for that native Maine tongue came through unmistakably.

In World War II, he served as control tower operator and interpreter in North Africa. Why the U.S. Army Air Force sought Frank to direct aircraft we will never know, but we did win and he celebrated the victory in 1945 by marrying Titou Santamaria in Algiers.

At Hamilton, his classes in Introductory French and 17th- and 20th-Century Literature were known for the congenial and humorous style of the instructor, but at the same time he was demanding and a hard marker. He was very close to his students and genuinely interested in their welfare, and upon his retirement they honored him by establishing an achievement prize in his name. His particular scholarly interest was Camus, and he infused his cotemporary literature class with the ideas of this philosopher. In 1957 Frank helped establish Hamilton’s first off-campus program, the Junior Year in France; in the mid ‘60s, before the Critical Languages Program, he taught Introductory Italian; for many years, he read applications on the Admissions Committee, as well as essays for the College Entrance Board. He was a hard worker, but when it came time for sports he was there, officiating at swim and track meets or rooting for the Continentals.

The mark of this man, however, is not seen in any listing of activities and interests, but rather in his character. He was, above all, a very warm, straight-forward pragmatist, a man of enormous humanity who was honest and generous in all he did. He supported his colleagues and he cared for the institution. His responses were typically laced with down-Maine wisdom and, always, humor. Once a young colleague sought his advice because it was apparent he was not a very popular instructor. “Pas de problème,” replied Frank, “consider it a badge of honor.”

Frank Hamlin cared deeply for his family, always referring with great admiration and pride to Titou and to his four daughters, Mary Anne, Suzanne, Lynn and Janette, and their families.

A departmental colleague says: “Frank’s absence creates a great gap for us all. Stalwart and kind, he gave us all a deeper sense of our purpose.”