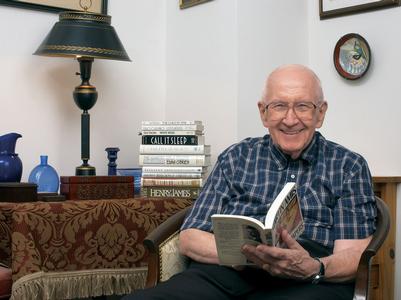 Fred Wagner, who died in Utica on October 28, 2012, was born April 15, 1928 in Philadelphia. Co-valedictorian of his New Jersey high school, he graduated summa cum laude from Duke in 1948 as the valedictorian and a member of Phi Beta Kappa. After receiving his M.A. in English from Duke in 1949, he taught at Oklahoma and Duke before being drafted during the Korean War for two years of service as a First Lieutenant (Artillery) in the Army. In 1953, hoping to be a dramatist, he moved to New York City, where he took post-graduate seminars in playwriting, film writing, and television writing at NYU, the American Theater Wing, and the New School. Meanwhile, he also began a career in advertising and publishing that culminated in eight years as promotion manager for Harper & Row. In 1965, Fred returned to Duke to work towards a Ph.D. in American literature, which he received in 1971, two years after being hired by Hamilton. While serving as Chair of English from 1978 to 1990, Fred led a relatively hierarchical department of tenured white males to function more inclusively and to hire women and persons of color for six of the eight tenure-track searches conducted during that time. Fred retired in 1995, having decided that his recovery from a stroke a few years before was not complete enough for him to meet his standards as a teacher. In retirement, until very recently, he always knew more about the careers of actors and actresses, more about current fiction and film, than any of his visitors at Acacia Village. He also met regularly with Jim Bradfield (Economics), at times joined by George Bahlke (English), to discuss such classic novels as War and Peace and The Sound and the Fury.

Fred was married to the actress Barbara Brady from 1959 until their divorce nine years later. He is survived by his son, Alex (Hamilton ’73), whom he adopted while Alex was a student here, by a daughter-in-law, Marilyn, and by a granddaughter, Alexandra.

In the early 1960s, Fred published four books of what would now be called YA non-fiction and published a fifth, Robert Morris, Audacious Patriot (1976) while at Hamilton. Fred’s academic scholarship focused on the life of Bronson Alcott, though he never did complete his projected biography of that important American transcendentalist.

Fred’s great commitment as a faculty member was to his students. In his job application to Hamilton, he explained that he had “decided to leave publishing because I felt it essential to spend my years on work more useful and meaningful than promoting merchandise.” For Fred, nothing was more useful and meaningful than helping students develop their critical imaginations, what he sometimes called their "venturesomeness," in surveys of 19th or 20th Century American literature, in courses on Faulkner, British and American drama, and American literary autobiography, in workshops on expository writing or playwriting. Before enrollment limits became standard college policy, Fred’s literature courses typically had rosters of 50, 60, 70 or more. In such courses, Fred lectured to the entire class once a week on Mondays and then divided the class into discussion sections of 15-20 students on Wednesdays and again on Fridays that met in his office, Root 201, now the Wagner classroom. This meant that while each student was attending one lecture and two discussion sections a week, Fred was teaching 7, 9, even 11 meetings per week for a single course. Not surprisingly, he knew his students as well or better than those of us teaching the same students in smaller courses. Not surprisingly, when Fred retired, his former students funded a prize scholarship in his honor.

Fred once told me that his best teaching occurred when he spoke the least. In his discussion sections, the students sat seminar style and generated conversation among themselves through preparing their own questions to pose to each other (three typed questions collected from each student for each discussion).  A photo in an Alumni Review profile of Fred shows him during a class in his office trying to be as unobtrusive as a 280-pound person in a suit can be when sitting around a table among people 30 years younger wearing jeans. But usually, he sat at his desk in a corner of the room and listened. One of Fred’s students wrote in the profile that “by choosing instead to remain a virtually silent spectator in discussion group…, one who intercedes only when certain a student pursuing the elusive intricacies of Moby Dick is about to drown, Mr. Wagner insists that each of his charges wrestle with the great achievements of literature himself. In doing so, he evinces his own ultimate faith that each of his students is capable of developing his or her own ideas” (Kevin Hanlon ’79 in a 1978 Alumni Review). Throughout his career, Fred usually received the highest course evaluations in the Department despite assigning the lowest average grades. He was immensely proud of being named the first holder of the Christian A. Johnson “Excellence in Teaching” Chair in 1990.

Fred Wagner never did anything by halves: when he smoked, he chain smoked; when he opened a box of cookies, he was likely to eat them all in a day; when he went on a diet, he would lose a hundred pounds, and then gain it back. His warm, welcoming laugh could be heard throughout Root Hall. He was so meticulous a marker of student work that, I’ve been told, he sometimes returned an essay having cut out with scissors a sentence from his own final comments that, on reflection, he thought unhelpful in improving the writer’s prose. He gave students his full attention. A Hamilton graduate’s response to the news of Fred’s death tells us what this felt like and why Fred was so admired: “He was an intense, respectful listener. His respect was empowering, because it replaced my self-doubt with discipline and confidence. This may be the greatest gift a teacher can give a student” (Donald Condit, ’75).