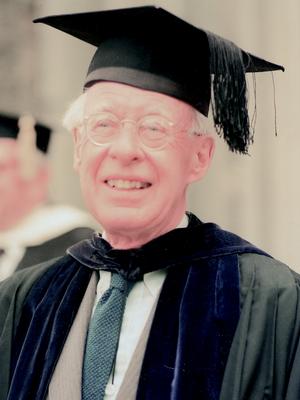 died on February 17, 1985. Much of his life he spent on the Hill, graduating as a member of Phi Beta Kappa and as valedictorian of his class. After teaching on the Hill for the years 1924-26, he went to Columbia University where he earned the A.M. and Ph.D. in English. In 1930, he returned to Hamilton as an associate professor of English. He became a professor in 1941 and the Hamilton B. Tompkins Professor of English Literature in 1958. He served as chairman of the Department of English from 1952 to 1968. Retiring in 1973, he taught for one last term in the spring of 1975.

Of his writings the two most important are books. The first, Benthamite Reviewing (1934) is the standard work on the influential periodical, The Westminster Review. The second, Wordsworth, The Biographical Background of the Poetry (1970) reveals his intense interest in the poet whose work shaped many of George Nesbitt’s own feelings and beliefs.

Within the faculty his was an influential voice. He served on all the important committees, many more than once, and chaired most of them at one time or another. The committee work he took most pride in was the report on the curriculum he helped to write in 1947. The recommendations of that report largely shaped the curriculum until it went through the revisions of the 1960s.

As a teacher, George Nesbitt had a magical quality which contributed to his life in this academic community and beyond. That quality helped many of his students to think, read, and write with great sensitivity and helped to direct a good many of them towards academic life. As George Nesbitt honored the College, the College saw fit to honor him by conferring on him a doctorate of letters at commencement, 1983.