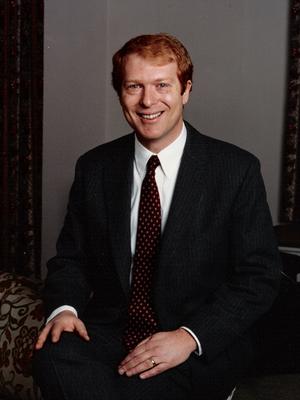 Harry C. Payne, president emeritus of Hamilton College, was born on March 25, 1947, and died unexpectedly on January 7, 2008, at the age of 60. A remarkably accomplished historian and academic leader, he served as president or acting president of three distinguished liberal arts colleges and the nation’s largest independent school, yet he always remained completely unpretentious.

As a teenager, Hank dreamed of becoming a diplomat, but when Princeton and its Woodrow Wilson School turned him down, he attended Yale instead, where he “fell in love with school;” he revered his teachers there as everywhere, and could recite the names of nearly every teacher he ever had, from childhood on. He decided to become one. He graduated from Yale summa cum laude with simultaneous bachelor’s and master’s degrees, and was recognized as the highest-ranking candidate in the Yale College Class of 1969. That summer he married his high school girlfriend Deborah Laipson, from Wooster, Mass.; they would have two sons, Jonathon and Sam, both of them growing up to become accomplished scholars. After college, Hank undertook Ph.D. studies in history at Yale, won Danforth and Woodrow Wilson Fellowships, and in 1973 received his doctorate and began teaching at Colgate University. In 1980, he became acting dean of the faculty and provost at Colgate, at the age of 33. In 1985, having in the meantime served as president of the American Society for Eighteenth Century Studies, he became the provost of Haverford College, and two years later was named its acting president. In 1988 he was chosen to be the 17th president of Hamilton College, becoming one of its youngest presidents, and its first Jewish president, to the delight of his mentor and friend, legendary Hamilton trustee Sol Linowitz. During these years, he also authored or edited several books and more than 50 articles, essays and reviews on European intellectual history.

At Hamilton, Hank focused particularly on fundamental issues of admissions and student life, overseeing a dramatic increase in student diversity, initiating the construction of Beinecke Village and deftly launching the process which eventually led to the transformative Residential Life Decision of 1995. Yet he never seemed overwhelmed by the job. One day in his first semester at Hamilton, he joined Deborah Pokinski and me for lunch in Azel Backus House. He told us he was enjoying teaching a course on, I believe, the Enlightenment. When we asked how, as a new president, he found the time to teach a course, he replied, “Oh, you always have the time; you just have to decide what to spend it on.” It seems that his mentor Sol Linowitz had told him that “You’re the president; YOU get to decide what you’ll do.” And he did. During the day, one could often see Hank strolling the campus, walking his golden retriever Ginger, who always seemed to find the mud puddles.

Hank also loved to play golf, where he excelled at the “short game.” He was a partner so comfortable and relaxed that those around him felt their own game was improved simply by his presence. And his demeanor on the course was the same as his demeanor while leading commencement ceremonies: totally attentive and competent, but also a bit whimsical, gentle and self-effacing.

In January 1994 he left Hamilton to become president of Williams College, where he remained for six years until 2000, when he moved to Atlanta, Ga., becoming president of Woodward Academy. It was a huge step for Hank and Debbie, leaving the small college towns of the Northeast to go to a large, Southern city, and leaving the upper realms of higher education for the noisier world of a pre K-12 school. Hank became a leader in the philanthropic, arts and Jewish organizations of greater Atlanta, and quickly came to embrace his work at Woodward. It was a different life, but one with its own special challenges and rewards. Among the best moments of his year, he said, were his regular visits to kindergarten classes, where he would sit surrounded by the children, reading to them from his favorite stories about Babar the elephant.

Hank Payne was a devoted husband and father, a consummate intellectual and a masterful academic leader whose hand was gentle but firm; since his passing, he is perhaps most often remembered for his brilliant intelligence and his unfailing kindness. His portrait in the Hamilton library is rather remarkable, as former President Tobin has noted:

“One does not gaze directly at, nor lift one’s eyes up to embrace an august, stately, remote personage; rather, the viewer looks … from the level of a student’s chair upon a teacher, with that distinctive shock of red hair and a chalk board in the background. The portrait is distinctively, irrepressibly Hank.”

He will be missed.