When Frank Hunt joined the Hamilton faculty as 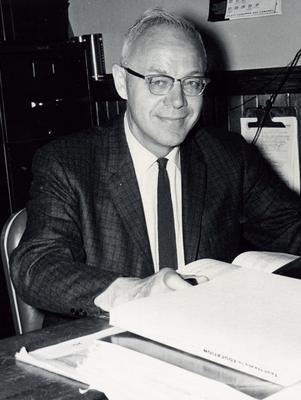 Prior to World War II he had taught public speaking briefly at Amherst and Smith followed by a wartime stint as a field officer for the Office of Price Administration.

One of his first ventures at Hamilton was a shot of adrenalin to a moribund Debate Club. For over two decades he charged it with vitality, integrity and excitement as they travelled with considerable success to tournaments throughout the northeast.

Frank related to Hamilton as one relates to a congenial community: involvement, enthusiasm and commitment. Throughout his 31 years as a member of the faculty, he served on several committees, coached lacrosse as well as debating, officiated at track meets, judged student speaking competitions and sporadically taught courses at Colgate, Utica College and MVCC. For many years he was a one person Education Department and often a member of the Middle States Association of Colleges and Secondary Schools evaluating teams. A mild man in most matters, in squash and tennis he could blitz much younger opponents, some of whom occasionally walked away with unrequited love.

Back in the ’50s and ’60s when extensive travel was a frontier not often breached by those with academic salaries, Frank successfully pursued travel and teaching grants which led him and his wife Ebba to the USSR, China, Japan and many other places either side of those distant lands. These ventures provided him with plenty of grist for articles on educational traits of diverse cultures.

For many years his office was at the head of the first flight of stairs in Root Hall. Since the door was always open, a glance inside almost anytime confirmed those statements in the College catalogue about continuous consultation between students and their professors.

Frank was a native of Maine, a biographical fact that became plain enough whenever he might mention something about tidying up his yard or tending his garden – activities to which he devoted generous slices of his spare time.

At Kimball Farms, a retirement complex to which Frank and Ebba moved in 1990, he promptly carved niches. One of the residents there said of him, “No one else here has been as active in as many enterprises and contributed to the welfare of the community in so many ways.” He launched a literary society there, which now has a book fund in his memory.