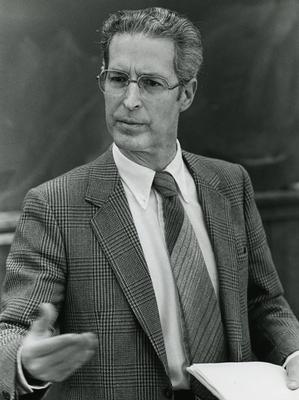 ep into Pennsylvania soil. Born in Philadelphia in 1929, he was a graduate of Penn Charter and later completed his professional training at the University of Pennsylvania where he found the beginnings of wisdom in the form of French culture and its perfect embodiment in the person of Françoise Micheau.

Jim came to Hamilton in 1958 and remained a steadfast member of the community until his retirement in 1991. During the past 10 years, in recognition of his accomplishments as teacher/scholar, he occupied the endowed chair of Burgess Professor of Romance Languages.

In 1963 when he and the Hamilton College Junior Year [in France] were both very young, Jim assumed his first directorship of the program in Paris. He still holds the record, with no less than eight stints as head of the Hamilton group. Moreover, so much were his colleagues in admiration of his meticulous organizational skills that they asked Jim to prepare a directorial handbook. With regular updatings, that sacred text has been the major guide for every administrator since.

Jim’s unswerving interest since graduate school had been the contemporary French experimental novel. Over the years he kept track of innovations and dispensed his considerable knowledge to generations of Hamilton students. Parallel to his enthusiasm for new ideas in fiction, Jim maintained an impressive record library of modern music. While most of his intellectual cohorts listened to classical Jazz and Bach, Jim regaled himself and friends with the latest testimony to musical invention. The very last time I saw Jim, he was happily wending his way across campus to a concert of New Music.

Jim was also a pioneer in work on computer-assisted language instruction. In 1985, he participated in the creation of a software program for D.C. Heath and Company, and in 1988 he was granted PEW funds to continue his research in this important pedagogical area.

As far as I know, he is one of the few critics of modern French literature to have recognized the genius of the writer Paul Gadenne. On that propitious day when the world rediscovers this gifted novelist, no doubt Jim’s landmark study will rank among the first significant synthesizing essays on Gadenne’s work.

Appearances are often deceiving. Under the surface of Anglo-Saxon restraint and sobriety lay in this man an abundantly generous and kind spirit. One could always turn to Jim Davis for a favor and expect prompt results accompanied by a beaming smile. He was the very essence of dependability and good manners.

Death is a terrible and abrupt interruption in the interchange among humans. If it were possible, I should like to impart this closing word to James Davis: I was glad, Jim, to have you as a colleague and a friend.