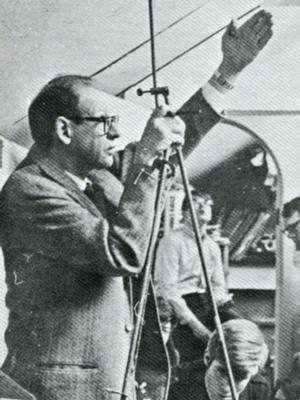 James Penney, fellow of the National Academy of Design, taught in the Hamilton Art Department from 1948 to 1976, retiring as Margaret Bundy Scott Professor. He died on August 1, 1982. First recognized as a major American artist during his years as a muralist with the WPA Arts Project, Penney went on to win several national competitions, including the commission in 1963 to paint the murals in the rotunda of the Nebraska State Capitol at Lincoln.

A product of the Depression Era, James developed an instinct for recycling discarded objects into works of art that was the envy of latter-day ecologists. He inspired several generations of Hamilton students, who through him learned not only the craft of drawing and painting, but what it was to experience the world with the eyes and imagination of an artist. He will be remembered as a man of gentle manner, but unshakeable conviction.