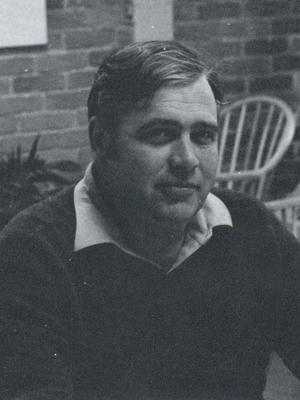 John T. Anderson was born in Atlanta, Ga., on January 2, 1942. His father’s job was cause for John’s family to move periodically, and as a result John’s early education took place in Kansas and Nebraska. Then, in 1960, John graduated from a public high school on Long Island. He entered Hamilton (as a student) later that year and distinguished himself as a teetotaling fraternity brother and as a mathematics major whose modus operandi was to write a solution to every problem in every text he used for every math course he took. He graduated Phi Beta Kappa from Hamilton in 1964, and then received his Ph.D. in mathematics from Duke, astonishingly, a mere three years later. He returned to Hamilton in 1967 to begin a distinguished teaching career.

John was a gifted mathematician. Anne Young, a former Hamilton Math Department member and chair, and currently associate vice president of academic affairs at Loyola, Baltimore, says that John was the cleverest mathematician she’d ever known, and cites his ability to write true-false questions with three possible answers: always true, sometimes true and never true, accompanied by a grading rubric that allowed for partial credit. Regarding his prowess in mathematics, Gordon Prichett, former Hamilton mathematician and currently professor in Babson College, recalls:

“John was a far better mathematician than he believed or than he proved himself to be to the outside world. I could not inveigle him to publish, no matter what length I went to. I came one day into his office and presented him with this problem:

Find all integers that are prime under any rearrangement of their digits.

“John found a marvelous solution overnight which I encouraged him to send into the (American Mathematical) Monthly. He, typically, declined – so I took it upon myself to send in his solution, which was published as the ‘clever’ solution to the problem. I have always wondered what he would have accomplished were he to have pursued research with passion.”

John’s overwhelming passion was for teaching mathematics and for exposing mathematics. Regarding exposition, he worked tirelessly and cooperatively in all his endeavors. The book Excursions in Number Theory, co-authored with the late Hamilton mathematician Stanley Ogilvy, remains a classic in the field today, having seen countless printings since it first appeared in the sixties. John also wrote for one of the editions of the Salas, Hille Calculus text, the diamond standard among calculus texts. And most recently he co-authored a pre-calculus series with me that has been used by an estimated 100,000 students nationwide. John was also a valued and highly principled reviewer for the Monthly and the Mathematics Teacher journals.

But teaching was John’s life. The narratives of his teaching evaluations read like banquet testimonials, as one might expect from a professor who managed to draw quite a crowd each term to his famous eight a.m. section of calculus. He would emerge from his classes beaming, covered with chalk, usually sweating, and his wake a trail of students following their guru to his office, where the conversation could continue at somewhat less than fever pitch, and where mathematics and, more importantly, life, could be sorted out.

Eileen Mulvihill DiPaoli, Hamilton Class of 1990 wrote recently: “When I think of my years at Hamilton I think of my friends, my coaches, and then I think of John Anderson. I became a math teacher as Professor Anderson expected I would. He knew, even before I did, that teaching would be my career. I tried business for a while but of course entered the teaching field. I let him know my decision and he wrote back a very thoughtful note. I took many of his classes at Hamilton and enjoyed them all, but most of all, since he was my advisor, I enjoyed sitting in his office and chatting with him. I will never forget his laugh and the way his whole face lit up. He made me laugh often. What a gift he had.”

John’s passion for teaching and advocacy for his students have also had their effects on exactly who constitutes the Math Department at Hamilton and how we enact our teaching mission. John was ardently intolerant of incompetence when it came to teaching. And for those of us lucky enough to become tenured members of this great department, his inspiration for us to keep re-defining excellence in the classroom was palpable, even vexing.

Again Anne Young writes: “So much of what I know about teaching, I learned from John. He taught me how to write for students – what to pay attention to. My second year at Hamilton I sat in on his intro to computer programming class. I have no idea what language the students wrote their programs in. John announced on the first day that they could learn syntax on their own (and if they needed help, they should come see him). Class was devoted to problem solving with students working in groups. And this was before calculus reform or any other kind of reform movement.”

One final note: If teaching was John’s life work, then golf was his life’s play. In recent years, he took most of his academic break vacations at the Arizona home of his son John Philip and John Philip’s wife Lupita, a home which conveniently sits on a golf course.

Professor of Philosophy Bob Simon recalls: “For much of the ’70s and early ’80s, John, Robin Kinnel, Dave Smallen and I represented the College at a number of area golf fundraisers for charity, such as Operation Sunshine, and John was proud of winning the Mohawk Valley Industrial Tournament against teams from most of the area’s then more numerous major employers. John acquired a taste for victory and discovered more and more obscure golf tournaments in which we could be competitive. His triumph was the discovery of and trip to the little known Ilion Open, an event so small that our group, none of whom lived in Ilion, constituted a substantial part of the field.”

And Professor of Chemistry Robin Kinnel independently reported the following: “John was my partner at the 7 Oaks Member-Guest tournament several times. During one of our last outings, for one round we were paired with Bob Simon and his guest. Bob was having a spectacular day – well on his way to shooting what has been the best score of his life, a 72. When it became apparent that Bob was on his way to a career round, John whispered to me that we should keep joking and horsing around to keep Bob loose so that it would be more likely that he would continue to do well. In his ineffable way, John did keep it light, and I’ve always felt that he contributed something to Bob’s success that day and enjoyed sharing in Bob’s elation at having shot such a great round.”

John wanted us all to succeed. He tried to teach us, his students and colleagues, to bring out the very best we have to offer. And we are grateful to him for that.

As a result of complications following surgery, John passed away on June 16, 2000, in Saint Luke’s Hospital, with his son, daughter-in-law, former wife Jackie and several Math Department colleagues close at hand.

John is not present at this faculty meeting today. But I assure you it has nothing to do with the fact that he is dead. Even if he were alive, he would not be here. Rather, he would declare: I have far more important things to do than listen to ramblings about a deceased teacher/golfer. And it’s obscene to waste the time of these good people, forcing them to listen to such ramblings. Well, John, I respectfully disagree. I feel quite comfortable having taken a few minutes of faculty meeting time to talk about John Anderson and his version (or is it vision?) of a life squarely devoted to Hamilton College.