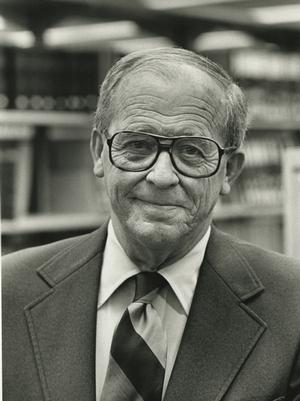 n July 29, 1922. John was educated at Kent School and entered Williams College in the fall of 1941. The Second World War intervened, and from 1943 to 1946, John served in the U.S. Army, Adjutant General Department. He spent three years in the European Theater of Operations, receiving the ETO Ribbon, Battle Star and Meritorious Unit Award. He rarely spoke of this period of his life other than to mention once in passing that he “saw Europe on his belly.”

John returned to his college education in 1946, receiving a B.A. from Amherst in 1948 and an M.A. in 1950. He then pursued a Ph.D. at the University of Edinburgh from 1950 to 1952, receiving the degree in 1954. From 1952 until 1958, John was on the faculty at Amherst, first as an instructor then as assistant professor. He was appointed assistant professor of biology at Hamilton in July 1959, and advanced through the ranks to full professor in 1969. John contributed greatly to the College through service on major committees and in various advisory roles. He was a charter member of the Hamilton College Chapter of Sigma Xi, and also guided the Senior Fellowship Program through the first eight years of its existence.

John began publishing while still working on advanced degrees and continued thereafter. He contributed to the field of genetics in prominent journals such as the Proceedings of the National Academy of Sciences, Genetics and Nature. His knowledge of human genetics complemented his experimental work with fruit flies, and he served as a consultant in genetics to the Upstate Medical Center in Syracuse and held an appointment as senior scientist at the Marcy State Hospital.

John could frequently be found in the Science Building at nights and on weekends, tending to his flies, grading tests or assignments, or just pushing paper. Yet he never let his work get in the way of having a good discussion with colleagues or students. He was widely read and was forever asking if one had just seen the article in such-and-such a journal or magazine or newspaper. His widespread interests place him in the category of renaissance man.

When he retired in 1987, it was written that John nurtured “countless generations of fruit flies” and introduced “not quite so many generations of undergraduates to the mysterious and fascinating world of genetics.” John also nurtured his young colleagues and served as mentor to many of us.

John was enjoying his retirement. He and Cynthia, his wife of 48 years, did not wish to leave Clinton and the Hamilton community and chose to stay here instead of going to Maine where they had a summer home. A frequent visitor at morning coffee in the Alumni House and at Biology Department seminars, John stayed in touch with his friends and colleagues on the Hill. To the end John was a caring, thoughtful and vibrant individual. We have lost a wonderful colleague all to soon.