Presented: May 3, 1994, by Rouben Cholakian, professor of romance languages 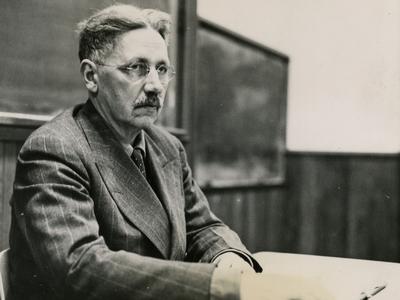 at Hamilton, when Patricia and I were summoned to dine with the Mattinglys. John’s legend had preceded him and we were understandably apprehensive and curious. Why us? Not far into the evening we had the answer to our question when John announced in his characteristic rasping voice: “We gathered you were strange enough to warrant a preliminary, investigatory invitation.” It was a difficult assessment to live up to, especially coming from one who had devoted so much energy to forging his own colorful persona.

John Robert Mattingly was born on November 17, 1902, in Celina, Ohio. He received his A.B. from Chicago University and his Ph.D. in classics from Yale. On June 25, 1934, he married Helen A. Boose, also a graduate student in classics at Yale.

John began his teaching career at Hamilton in 1931, the year before I joined the human race. He often spoke bemusedly of being the only Yale graduate invited to an interview for the one job listed that very lean depression year. The two parties apparently looked each other over somewhat skeptically before the temporary position turned into a relationship that lasted 40 years. John Mattingly retired as Benjamin-Bates Professor of Classics in 1973.

One cannot help but be impressed by the awesome catholicity of this voracious mind. His interests ranged from stoic philosophy to existential literature, from Italian Renaissance art to Early American furniture-making, from Plato to Freud. At any one time one could find on his reading table a copy of Heidigger, the collected verse of Francois Villon and the latest study on some pharmaceutical scam. He belonged to The Walpole Society, The Furniture Historical Society and, over the years, to any number of other learned organization depending on the generous curiosity of the curiosity generous. His articles appeared in the Philosophical Review and Osiris, and in 1976 he prepared the preface and accompanying notes for a collection of etchings by a young artist he admired very much, David Itchakawich. Among his unpublished works one finds a lengthy philosophical treatise in German, a detailed movie cum theatre script based on the life of Pope Alexander VI and a decoding of the cryptological messages in the works of the 15th-century Italian painter Giorgione.

But perhaps John’s greatest creation was himself. For many of us he was the Ur-eccentric professor who magisterially bestrode our campus, setting the highest standards for limitless self-re-invention. His classes were an intellectual awakening for many an unsuspecting student who had to digest heavy doses of philosophy, political science and art criticism all exuberantly blended with grammatical paradigms and readings of the classic authors. “Never graduate without Mattingly” became a watchword at Hamilton. His erstwhile student, and later colleague in classics, Herbert Long recalls John as a “stimulating teacher … entertaining and witty.”

With all that formidable erudition, John was not, however, beyond playfulness. Some will remember his singing in a faculty skit poking fun at trustees: “We merely raise the dough and decide where it will go.” And for those of us who had a closer acquaintance with his humor, we quickly learned to enter into his word games and hyperbolic comments on the human condition. On one occasion he ordered me to take home one of his rifles to ward off the imminent attack of enemy forces and smiled gleefully when I responded that I had my own, private store of grenades.

I feel so very privileged to read this memorial statement and more so to have known that unique man it fumblingly tries to capture. With John Mattingly dies a friend, a colleague, and an epoch. Requiescas in pace, Jovanes!