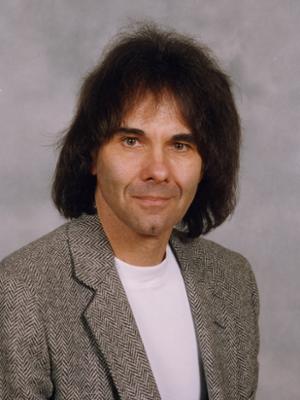 John’s graduate study and academic career are striking in their illustration of an energetic professional who was deeply committed to psychology. As he was completing his master’s work in child psychology, John also taught at Mohawk Valley Community College where he quickly became a popular and well-respected professor. Despite the heavy teaching load at MVCC, from 1979 to 1982, he simultaneously pursued his doctorate in developmental psychology at Syracuse University, where he worked with Dr. William Hoyer on the cognitive processes involved in aging. It was during this time that he published, in collaboration with Professors Hoyer and Roodin, 14 scientific articles and two books. In 1982 John received his Ph.D. in developmental psychology from Syracuse University.

In 1990 John taught at Hamilton as a visiting professor, and during the next year he joined the College as an associate professor in a tenure-track position. During the next nine years, he was awarded tenure, promoted to full professor and published another book and an additional 23 scientific articles. John’s research focused on the normal changes in memory that occur with aging, as well as on the pathological changes associated with Alzheimer’s disease and brain injuries. John’s international reputation in his field was recognized by his election as a fellow of the American Psychological Association in 1995 and his recent award of a research grant from the National Institute of Aging.

In addition to his commitment to contributing in science, he also was dedicated to making contributions to the local community. For example, he was a board member of the Court Street Diagnostic and Treatment Center in Utica since 1993 and served as that center’s president from 1995 until the time of his death.

To John, life was to be celebrated whether it was in the sharing of a bottle of fine wine with his wife and friends in France or having a cup of soup with colleagues at the Opus Café on the Hill. His partner in his celebration of life became Vincenza (Vinnie) Granato, whom he met in 1968 when they were both students at Oswego. They became inseparable and enjoyed a deep, loving relationship.

To all who knew him, it was John’s warmth and sensitivity to the needs of others that distinguished him. He would consistently show concern for the problems of others without complaining about his own. In heated departmental discussions, John worked to facilitate communication among all the members and consequently he had a calming influence on us all. John had a wonderful gift for being able to save the day by bringing a fresh and positive perspective to complex issues.

John exhibited the same enthusiasm for his hobbies as he did for his professional work. His daily ritual included jogging, and his record of accomplishments includes the Boston and New York City marathons. He was a gourmet chef, and he and Vinnie routinely invited their friends to their home for a dinner of unbelievable creativity and gastronomic delight.

John and Vinnie also traveled extensively, visiting Hawaii, Italy and France. His love of the French culture and cuisine resulted in several tours throughout the various provinces of that country, where he and Vinnie especially enjoyed visiting the many wine and champagne regions. Inspired by his father-in-law Joseph Granato and a deep love of nature, John became an expert gardener. His father-in-law also introduced John to mushroom hunting, which developed into an interest in mycology.

The personal qualities and intellectual insights that came easily to John made him a special teacher and friend of students. Among the best examples of this influence is the success of Scott Johnson, who was an unmotivated student at MVCC. From John’s concern for his life and his future, Dr. Johnson is now successfully pursuing a research career in cognitive psychology. In John’s brief time at Hamilton, he fostered the development of several close relationships with students who have benefitted from his concern and advice. It is remarkable how John’s own relationships with students have mirrored his own experience with his mentors at Oswego and Syracuse.

John Rybash, passed away on Sunday, June 27, 1999, after a courageous battle with cancer. Besides his beloved wife, John is survived by five aunts, an uncle and several cousins. The courage, wisdom, sensitivity and celebration of life that we saw in John Rybash serve as an inspiration to us all.