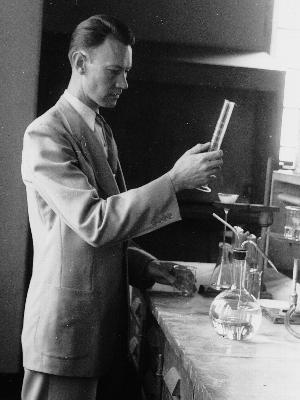 n Brunswick, Md., a small town near Hagerstown, close to the Virginia border. He attended Washington College, a small liberal arts college on the eastern shore of Maryland. A physics and chemistry major, Larry earned his degree in June 1937, entered Georgia Institute of Technology and was awarded a master’s degree in chemistry in 1939. After a year of graduate work at Purdue, he returned to Georgia Tech as an instructor in chemistry. Doubtless his romantic interest in Mildred Cunkle, whom he married in 1941, was an important factor in drawing him back to Georgia.

After two years of teaching, he entered the doctoral program at the University of Texas at Austin. During his graduate career, Larry served as a part-time instructor for three years, and in his last year he taught full-time. Upon completing his Ph.D. work in 1947, Larry took a position at the University of Tennessee as an assistant professor. The long arm of Hamilton, however, reached out and he was hired as an associate professor in 1948. After 10 years in rank, he was promoted to professor and named the Childs Professor “of Agriculture and Organic Chemistry,” a chair he held until 1979, when he was named Marjorie and Robert W. McEwen Professor of Chemistry.

Larry served the College with distinction in a wide variety of capacities. He was chairman of the Chemistry Department from 1958 to 1971 and then again for two years beginning in 1980 until his retirement in 1982. For three years following the Korean War, he was on the “Committee on Studies,” the equivalent of the present-day Committee on Academic Policy, which shepherded the College curriculum through the post-war turmoil; he returned to Academic Policy again in the ’70s, serving a total of five years, including the chairmanship in 1975-76. He also chaired the Committee on Appointments in 1965-66, the Dean Search Committee in 1974-75 and several other advisory committees.

Familiar with a number of premedical students through teaching General Chemistry, Larry was a member of the premedical committee for nearly 20 years. Following his retirement, Larry continued to take an active interest in the department and paid regular visits to see how things were going and to chat with students and faculty. He also was a wonderful source of stories and lore at the departmental social occasions.

Larry was quite interested in a wide variety of intellectual pursuits, although he was not a practicing scholar. He studied ion exchange chromatography both as a synthetic tool and as a catalyst, astutely perceiving its promise, since it is widely used in these capacities today. He was particularly interested in new ways of educating students, and he worked briefly with Hamilton philosopher John Blyth, a proponent of the “teaching machine,” in developing a book on scientific logic.

As his early history suggests, however, Larry was first and foremost a teacher. He was extraordinarily thoughtful in developing ways of presenting material to students and in finding ways to encourage students to do their best. One student, struggling to succeed in General Chemistry, chanced to meet Larry in the Chemistry Building corridor after lab one day and was taken aside for some advice and encouragement. Only later did he realize that Larry had probably been lying in wait for him. Larry was fond of telling students who were not using their time wisely in the laboratory that they were there for the first part of the word — “labor” — not the second — “oratory.” Students usually got the point.

Larry was always impeccably turned out, and his tall, gentlemanly presence prompted a Spectator writer to remark that it was the first time he’d had a professor who resembled a British valet. He was kindly, genteel, even courtly in his manner. His demeanor, however, masked a wonderfully sly sense of humor that was often sharp but never malicious. His warmth and caring nature, together with his honesty and decency, inspired respect in his students, indeed in all who knew him. On the occasion of his retirement, a number of his ex-students established an award in his name; it fittingly goes to the student who makes the best improvement between the first and second semester chemistry course.

Larry was a long-time member of St. James Episcopal Church. Highly respected there as well, he served as vestryman and then as senior warden, and was treasurer for a time.

Larry Yourtee died on Dec. 19, 1997, in Londonderry, N.H., at the age of 81. He is survived by his wife Mildred, their son Edward and his wife Elaine, and three grandchildren.