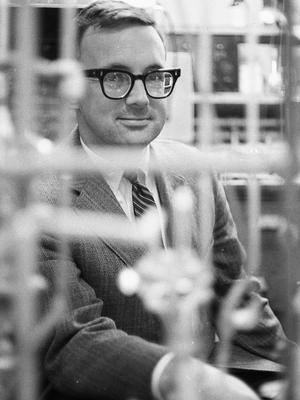 Leland “Bud” Cratty, Jr., a professor of chemistry on College Hill for nearly 40 years, was born in Oregon, Ill., to Leland and Kathryn Cratty. He graduated from Fort Atkinson High School in Wisconsin in 1948.

Cratty received his bachelor’s degree from Beloit College in 1952 with honors in chemistry and was elected to Phi Beta Kappa. Next came his Ph.D., which he earned at Brown University in 1957. It was also at Brown where he met and married Carol Gardiner.

After a brief stint as a research chemist at the Linde Co. in Tonawanda, N.Y., Cratty came to Hamilton in 1958 to take a job as an assistant professor in the Chemistry Department. According to a published obituary, “During many summer terms, Bud would do research at other universities around the country which involved packing all five family members and house pets into one car. With Bud the sole driver, the Crattys camped in between their far-flung destinations, enjoying many adventures, national parks, and friends along the way.”

Cratty taught courses in inorganic and analytical chemistry, and his research interests included super ionic conduction in solids; surface chemistry and catalysis, particularly at metal and alloy surfaces; and rates of adsorption at very low pressures. His work appeared in the Journal of Chemical Physics, The Encyclopedia of Chemistry, and the Journal of the American Chemical Society, and he received funding from the Petroleum Research Fund of the American Chemical Society to work as a visiting fellow at the Mellon Institute in Pittsburgh. Professor Cratty also worked as a chemist at the Ames Lab for the U.S. Atomic Energy Commission and was a visiting scientist at the University of Pennsylvania.

For the College, Cratty served on several committees, taught as part of the summer Higher Education Opportunity Program (HEOP), and was secretary-treasurer of the local chapter of Phi Beta Kappa. Yet his contributions to life on College Hill did not end there. In 1972, Cratty was instrumental in founding the Clinton A Better Chance (ABC), a program housed on campus that provides high school-age boys from underprivileged backgrounds with the educational opportunities and support services necessary to succeed in college.

It was through his involvement with the ABC program that Cratty came to know Margaret “Peggy” Mason, whom he married in 1982 following Carol’s death. Bud and Peggy traveled extensively throughout the U.S. and abroad, spending months in both Costa Rica and Maine each year. The two enjoyed attending operas in New York City and Cooperstown, N.Y., and spending time with family and friends. Bud enjoyed painting, writing poetry, and a ritualistic reading of the daily funnies, the obituary noted.

Leland Cratty, Jr., who continued to call Clinton home after his 1996 retirement from Hamilton, died on May 27, 2019, less than a week after Peggy passed away. He is survived by their combined seven children and 12 grandchildren. A sister and a brother predeceased him.