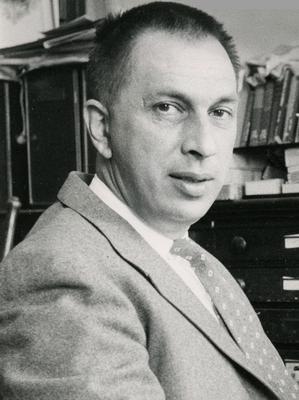 Nicolas John Gerold was born in Brooklyn, N.Y. on New Year’s Day, 1919. He died after an illness of several years at St. Elizabeth’s Hospital in Utica on April 9, 1986, at the age of 67. During those last few years of physical travail he bore the pain and its inevitable companion of depression with bursts of impatient optimism.

Nick was educated at the Riverdale Country Schools in preparation for his matriculation at Brown University where he earned his bachelor of science and master’s degrees. As happened to many of his generation, Nick’s formal education was interrupted by service in the armed forces during World War II. That interruption, in Nick’s case, lasted for five years during which time he obtained the rank of master sergeant in the First Infantry Division, the famous “Big Red One.” He was a participant in the Normandy invasion and in the European campaign that followed. That Nick was a true combat veteran is attested by the fact that he spoke very little about his wartime experiences except to remark, on occasion, that he had felt that his body had made one long, deep furrow across Europe. It was understood that this was Nick’s way of summarizing a most traumatic period in his life.

Nick received his Ph.D. degree in physiology and histology from Cornell University in 1951 and came to Hamilton that same year as the third member of what was then a small Department of Biology. He was chairman of the department from 1967 to 1972 and served as the Stone Professor of Biology from 1967 until his retirement in 1979.

Nick possessed a sharp, acerbic wit and often expressed his feelings with such forcefulness that he left no doubt whatsoever as to where he stood on the issue. During his tenure at Hamilton he was mentor to numerous pre-medical students, a group at the time notorious for its academic nervousness. He enjoyed a casual camaraderie with friends who were entertained by the gusto of his virtuoso personality.

He was elected a full member of Sigma Xi, the national honorary scientific society, here at Hamilton. He was, in addition, a member of the New York Academy of Sciences, the Explorer’s Club of New York, the Titanic Society and was quite active in a number of world wildlife causes. He and his wife Pat made several trips to East Africa to study wildlife in that part of the world following his retirement. For many years they and their children enjoyed the delights of their summer home on Lake Pleasant in Speculator, N.Y.

Santayana once observed: “For birth and death there is no remedy save to enjoy the interval.” Nick Gerold, except for the trauma of his war years, accomplished this.

Nick is survived by his wife Patricia and two children: Nicolas III of Maple Heights, Ohio, and Alison of Shrewsbury, N.J. He left a grandson, Nicolas IV, and two sisters, Mrs. John (Cecile) Libby and Mrs. Harold (Louise) Brown, both of Hastings-on-the-Hudson.

We the faculty of Hamilton College, extend our deepest sympathy to his widow and family over his loss, and we enter these remarks upon the minutes of the faculty as a permanent record in his memory.