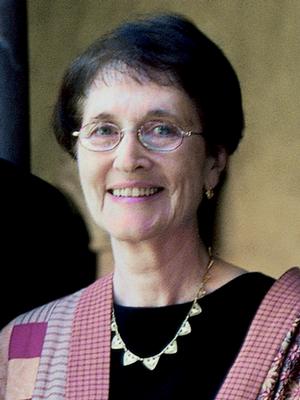 Patricia and Rouben, Rouben and Patricia. It is hard to imagine one without the other as most of us know so well. Rouben and we have lost a dear friend and colleague in Patricia Francis Cholakian, who had long been a vital force in the Hamilton College community before she was named associate professor of French in 1990. For almost 30 years Patricia taught a wide range of courses in French at Hamilton contributing fully to the life of the department and making curricular innovations such as her courses “French Women Then and Now” and “French for Business.” She was a wonderfully dedicated teacher and generous colleague. Patricia was among the founding mothers of the Faculty for Women’s Concerns, a member of myriad research support groups and one of the founding members of the International Association for the Study of Women of the Ancient Regime (SIEFAR). By the time Patricia retired from teaching at Hamilton in 1997, she had become an internationally recognized scholar of Renaissance and 17th-century French women writers and gender.

Daughter of Robert and Ann Francis, Patricia Francis Cholakian was born on August 13, 1933, in Indianapolis, Ind. After spending most of her school years in Springfield, Mass., Patricia attended Bates College in Maine where she graduated Phi Beta Kappa with a major in French in 1955. While there, Patricia met another Francophile, Rouben Cholakian, whom she married in 1955, and, as many women did in the 1950s, followed her husband where his career took him. While Rouben pursued his doctorate at Columbia University, simultaneously holding down a job at the Pingry School, then in Hillside, N.J., Patricia gave birth to the couple’s first of two daughters, Kathryn. The Cholakians then moved to the University of Virginia before settling in Clinton in 1963, never to leave until 1998, when Rouben and Patricia chose to retire in New York City.

During the couple’s early years here, Patricia committed much energy to raising two musically accomplished daughters, Kathryn and Anna. Known for her exceptional green thumb and the lovely gardens at the Ernst Road house, Patricia also played piano and, last but not least, had a keen fashion sense that complemented her talent for knitting and sewing elegant clothes. Colleagues tell me that there was a time when the Cholakians also hosted sheep at their Ernst Road address, but that item, I cannot confirm. The Ernst Road homestead was a whimsical place indeed.

Patricia’s many interests and talents of course tell only part of the story, for, later in life than most, she went on to obtain an M.A. in French from Middlebury College in 1970 and a Ph.D. in French with high honors from the Sorbonne University in Paris in 1978. By the mid-1980s Patricia moved into high gear in her scholarly research. At once fascinated by French literature and history, Patricia was eager to pursue new theory energetically in her work and in collaboration with other colleagues. One could always count on Patricia’s participation in various research and reading groups as well as on her offers to read drafts of work-in-progress or listen to a trial run of a talk.

Tireless in these supportive roles, Patricia went about her own research purposefully and steadily. The journal and book articles of the late 1980s on writings of the “Grande Mademoiselle” and Marie de Gournay were followed by a highly acclaimed book, Rape and Writing in the Heptameron of Marguerite de Navarre, published in 1991 in the noted Ad Feminam series of the Southern Illinois University Press. Using a variety of methodologies, semiotic, narratological and psychoanalytic, Patricia used her admirable command of current feminist theory and criticism to make lasting contributions to the fields of feminist criticism, Renaissance studies and feminist historicism. There followed other articles, an edition of Maria Mancini’s La Verite dans son jour co-edited by Patricia and Elizabeth Goldsmith in 1998, and the book Women and the Politics of Self-Representation in 17th century France published in 2000 by the University of Delaware Press.

Patricia’s passion for, and focus on, her scholarly work continued even as she battled cancer these last two years. She and Rouben were nearing completion of their co-authored biography of Marguerite de Navarre, a labor of love for them both. Describing this project, after 50 years of married life and different directions in research, Rouben, ever ready with a bon mot, claims that they finally met again in the Renaissance.

To many of us on the Hill and in the village, Patricia was a dear friend, a trusted critic, a community-minded citizen, an engaged feminist and a Renaissance woman for the 21st century. She cared as deeply about working conditions for part-time faculty on the Hill, the social climate for female undergraduates, the Armenian genocide, the fate of the gardens in Fort Tyron Park and a children’s theater group in her Washington Heights church as French women of the past.

From Ernst Road to Paris to Cabrini Boulevard in the shadow of the George Washington Bridge, Patricia moved in many worlds with grace and spirit. What further proof of the temper of her mind than the following anecdote from my colleague, Martine Guyot-Bender, who describes visiting Patricia in her New York home: Patricia had to give her guests a tour of her new Manhattan garden outside their apartment building: Martine writes:

“Patricia transformed the one tomato plant, the one basil plant, and the one or two flowers […] growing in that one square foot into a wonderful narrative full of small anecdotes and colors. Her cheerfulness in showing off her miniature garden was so telling of her way to find happiness everywhere she was, regardless of the circumstances. There is no doubt that while some of us pursue impossible goals, Patricia knew how to find happiness in the smallest things in life.”

While the University Presses of Columbia and Johns Hopkins negotiate who will publish Patricia and Rouben’s collaborative biography of Marguerite de Navarre, it is telling that the last publication Patricia saw come to print was not about her French favorites, but inspired by a 2000 trip to Turkey with Rouben. In January 2003, Logos journal published “Flight From Van, Memories of an Armenian Genocide Survivor,” in which Patricia restores to public memory the life of another woman of the past. Once again, our Renaissance woman shows her true colors by preserving the memories of the more recent and painful past of her Armenian mother-in-law, Varsig Pazian Cholakian.

Patricia passed away on Saturday, September 27, 2003, in New York City after a courageous and painful battle with cancer. Besides her dear partner in life and in scholarship Rouben, she is survived by her daughter Kathryn. On Monday, November 24 at 4:30 p.m., there will be a memorial service in the Hamilton College Chapel for Patricia to which all are invited.