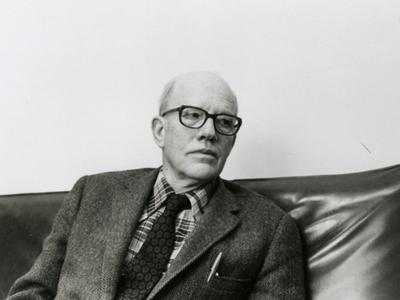 Robert Marcellus Browning joined the Hamilton College German Department in 1949 and taught, at one time or another, every course in that department’s curriculum until his retirement in 1979. He was not only a dedicated teacher, but an outstanding scholar as well. Remaining in Clinton he continued and significantly enlarged his extraordinary contributions to German literary scholarship until his death on June 13, 2000.

Bob Browning was born on April 1, 1911, in Centerville, Kan., and spent four years following high school working as a deck hand and cook on Mississippi and Missouri River steamboats. Encouraged by his fellow rivermen to go to college, he graduated with a major in biology from William Jewell in 1937 as the top student in his class. Bob then entered graduate study in German at Brown University, later transferring to Princeton.

Called into the Army in 1943, Bob landed in France on “D-Day+1” and spent the next two years perfecting his German on what he frequently called his “walking-tour through Europe.” In later years he delighted in recounting his difficulties in explaining to his fellow enlisted men that the cathedral at Rheims was not “just another church.” At the end of the war he was commissioned and assigned as an interpreter in Germany. Returning to the United States in 1946, he completed his dissertation on Theodor Storm and taught briefly at Princeton before his appointment at Hamilton.

Robert Browning was an extraordinary polyglot. Not only fluent but completely at home in German, French, Italian and Spanish, he listed under “hobbies” in an employment questionnaire: “learning foreign languages” and “reading Dante.” Walking home after graduation ceremonies one June afternoon, he remarked to a young colleague, “This summer I will learn Swedish.” And he did. At a Friday luncheon among retirees, a casual reference to the term “macaroni” in the tune “Yankee Doodle” elicited not only a delightful analysis of the term in Italian and its particular use in 18th-century Britain but also a riverboat cook’s appreciation of the pasta itself. His companions found weekly luncheons with Bob not only a delight but an education.

Bob Browning’s contributions to German literary scholarship were both important and extensive. In the 1960s two volumes, German Poetry: A Critical Anthology and Umgang mit Gedichten, served as introductions to undergraduates. In the 1970s German Baroque Poetry 1618-1723 and German Poetry in the Age of Enlightenment served as texts for graduate students. In the 1980s Bob edited three volumes in Continuum’s German Library series. In the 1990s he co-edited another series of anthologies, the final volume of which will be published next year — the 90th anniversary of his birth.

Professor Browning was a book review editor and then editor of the German Quarterly in the 1960s. He was the author of a great many articles and reviews for the Quarterly and other scholarly journals. Popular as a visiting professor he taught at Colgate, Dartmouth, Colorado, Pittsburgh and Buffalo. But he also clearly enjoyed the two years he volunteered to teach German to third and fourth graders in the Clinton Elementary School. Exceptionally modest regarding his scholarly achievements and renown, devoted to his discipline and his students, Robert Marcellus Browning brought distinction to that discipline and to this College.